4.5 stars: Review of A DAFFODIL FOR ANGIE by Connie Lacy 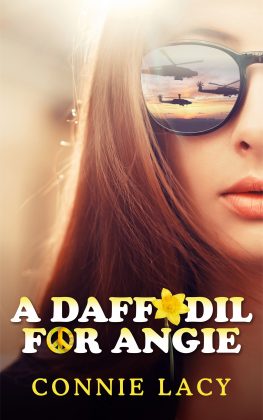 Sixteen-year-old, high school sophomore, Angie Finley, must buckle up for a ride when school starts in the fall of 1966. Her father, divorced from her mother, is touring Vietnam. Over the summer she streaked her brown hair blonde and traded in her glasses for contacts. So, on the first day of school, Craig, a junior football-playing hottie, notices her.

Racial tension is also rampant and Angie witnesses an African-American girl, Valerie Franklin, being mistreated. Part of her wants to intervene, the other part of her chooses not to get involved. When Angie gets to homeroom, Valerie walks in. She is the only African-American in class. The teacher, Dr. Kelley, has the students sit alphabetically, so Valerie ends up sitting right behind Angie. The long haired guy to her right, Stan, is the rule breaker who intervened on Valerie’s behalf. Since Angie didn’t do anything to help Valerie, she figures the least she can do is say hi and talk to her.

At home, things are just as complicated. Her former cheerleader mother and sister want her to try out for the cheerleading squad. Even though Angie was a cheerleader in junior-high, she’s not really into it now. Her mother and sister think winning beauty pageants and being gorgeous is the only way to get a man, since snatching a rich, handsome husband is what life is all about, at least in their world.

Stan, the activist, approaches Angie to help with the school newspaper. He seems to just want Angie to be his secretary, because she is a girl, but Angie wants to write stories of her own, and puts him in his place. They become friends and she gets involved in Anti-war issues as well as issues involving racial prejudice.

Meanwhile, football player Craig asks her to homecoming and then gives her his class ring. Things are really heating up between them, but Angie feels like things are going too far too fast. Will she be able to get Craig to cool things down? Will she stand up for Valerie when pranks against her due to her race, go from bad to worse? Will she stand up to her bossy mother and sister who want Angie to live her life their way? Will her father stay safe in Vietnam?

Angie must deal with all of these issues during the coming months.

Strong writing and story-telling by a capable author who transports the reader back to the 1960s with depth, clarity and humor. Angie is a witty, likeable protagonist who has a heart for others and a mind of her own. She is a feminist being raised by a mother who has a 1950s view of women, which frustrates Angie. While the story deals with meaty topics of racial injustice,  women’s rights and the Vietnam war, with clever brush strokes, as the story goes on, it also begins to touch on several other social issues, which makes it feel, at times, as if the author has thrown in ‘everything but the kitchen sink’. It then focuses less on Angie’s story and borders on becoming more of a diatribe on every cause out there. Also, the character arc was a bit disjointed at times. Angie behaved in a passive-aggressive manner with her family and boyfriend, regarding her own life, but showed bravery and courage when dealing with the plights of others, even people she didn’t know very well. This led to moments where Angie’s actions and those of her mother, didn’t feel believable. There were also minor characters that were introduced in the beginning and crucial to the ending, but because they did not appear in the middle of the book, or did not appear much after that, it was hard to remember who they were. This caused the climax and ending to lose a bit of steam.

Overall, a well-told, engaging story with a strong sense of time and place. Fans of Historical Young Adult novels or novels dealing with social issues, will enjoy this book.

Eagle Eye Book Shop : 12.99
Amazon e-book: $0.99
Amazon hard copy: $12.99
Visit the Official Website
Find it on Goodreads
Like it on Facebook
More about A Daffodil for Angie on UBR

Strong writing and story-telling by a capable author who transports the reader back to the 1960s with depth, clarity and humor. Angie is a witty, likeable protagonist who has a heart for others and a mind of her own. She is a feminist being raised by a mother who has a 1950s view of women, which frustrates Angie. While the author may have tried to tackle too many social issues in one book, overall, this is a well-told, engaging story with a strong sense of time and place. Fans of Historical Young Adult novels or novels dealing with social issues, will enjoy this book.


Read A Daffodil for Angie