5 STAR REVIEW: The Book of Ralph by Christopher Steinsvold 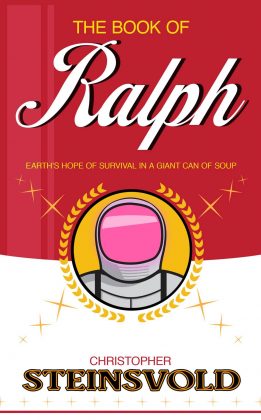 Often when people look up at the sky, we feel—quite intensely, even—the vastness of the universe and our relative smallness both at the same time. But on that eventful day of January 28th 2021, while looking up at a solar eclipse, Markus West and the rest of the world saw something completely different. A crimson message on the moon was written and it shook the entire world.

The message was: “Drink Diet Coke.”

The Book of Ralph is an exceptionally humorous and thought-provoking novel, and its blurb certainly delivered and more. Its comedic elements are wonderfully unexpected, much like the crimson message that geared this whole story to start.

Markus West was tasked to lead the investigation on what the world later called “lunar advertisement.” And when his investigation confirms that Coca-Cola Company has no responsibility whatsoever on the ad, Markus becomes the most hated man on Earth. That is, until one year after the lunar advertisement first came out, when a giant can of Campbell’s Chicken Noodle Soup is hurtling straight down to the White House, and an alien named Ralph claims responsibility for everything. Ralph made contact with Earth and needed Markus’s help to warn the White House of an inevitable malice approaching Earth.

Markus greatly portrays, and even go so far as represent the reader of this novel. He is constantly confused about what exactly is happening and yet he rolls with the punches. Most importantly, he is relatable. On the other hand, the alien, Ralph, is quite the opposite. We do not exactly know what he does and why he does them. But like Markus, perhaps even more than him, you cannot help but adore him while be at awe of his wisdom. Together, the two of them complements each other and their bond is not questionable at all.

The narrative did come off as clunky at some parts and there were times when the dialogue was too drawn out. But the overall pace was not too fast nor too slow. And the humor embedded in almost every chapter offsets any clunkiness.

Overall, The Book of Ralph was a page-turner and wonderfully hilarious reading experience. If you love thought-provoking books, lovable aliens and a fun time, do give this book a try.

The Book of Ralph is an exceptionally humorous and thought-provoking novel, and its blurb certainly delivered and more. Its comedic elements are wonderfully unexpected, much like the crimson message that geared this whole story to start.


Read The Book of Ralph