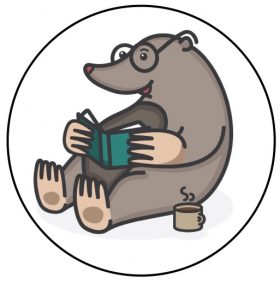 More about And Now A Word from UBR’s Official Spokesmodel. on UBR

Visit And Now A Word from UBR’s Official Spokesmodel.‘s website.

Hello everyone, I’m Talpa. Yes, that’s my picture there in the corner, a book mole in its natural environment - sitting on my ass, drinking coffee and reading a book. While I am naturally sexy, I don’t think the picture really captures my good side. Originally, I had painted my fingernails (I hate the term “claws”) for the photo shoot, but someone at Underground Book Reviews (who will remain unnamed) said it looked like I had blood on my claws…I mean fingernails. I told the bastard if he didn’t watch his smart mouth there WOULD be blood on my claws…I mean fingernails. Okay, bygones are bygones and I got the job.  You are now talking to the official spokesmodel for Underground Book Reviews!

Are you laughing? Seriously? Haven’t you ever seen a mole spokesmodel? Perhaps you should put your prejudices and bigotry aside and recognize true beauty and talent when you see it (oh, and brains, too). Oh, in case I forget to mention it, from this point on, the word “mascot” is offensive and officially banned. “Spokesmodel,” understand? Are we good? Excellent, I can see we’re going to get along fine.

Like I said, I’m a book mole. It’s kinda like being a normal mole, except instead of digging through dirt, us book moles dig through books. I don’t like dirt (unless its gossip!) or worms or holes in the ground or any of that yucky stuff. Book moles like BOOKS and coffee and wine and we live on couches.  I don’t really care for normal moles, they’re boring (and filthy.) Yes, I dated a few, but what is there to talk about with those guys except the consistency of clay versus sand? From now on, if I’m going to date a guy who lives in a hole it damn well better be a hobbit that looks like Aidian Turner (hang on, did he play a hobbit or a dwarf? Oh,it doesn't matter!). Enough about me, let’s talk about why we’re here – to talk more about me.

I was excited when the people at Underground Book Reviews asked me to be their spokesmodel. Unsurprisingly, they also recognized my talent in addition to my beauty and asked me to write a weekly column. I wanted to write reviews, but they thought it would be best I keep it more generic and not show any favoritism for one author over another. So, as my first official duty as UBR Spokesmodel, I am here today to deliver a message to all the indie authors out there…

…Your editor called and said you need to get your ass off Facebook and finish your manuscript.

You know what book I’m reading now? Not your's, that’s what. Because you haven’t finished writing it, because your too damn busy looking at cute cat videos and getting pissed off at someone else’s political posts. I know that’s harsh, but too many of you indie authors are surfing the net instead of writing your next book.

“But Talpa, I’m doing research. I’ll get to writing in just a few minutes.” Blah, blah, blah. Excuses, excuses, excuses. Yeah, just like I’m going to get off this couch and go to Curves today. Can we just stop lying to ourselves?

Don’t worry, I have good news. Talpa is here to help. From now on, I’m going to surf the internet for you. Hear that clicking sound? That’s my claws…I mean fingernails…clicking away, scouring the internet for blogs, articles, and other cool stuff that authors and readers need to know. Here’s the first installation of my weekly column. This week I bring you five informative articles and blogs from around the net. I don’t have a name for my weekly column yet. Someone on the staff suggested calling it “Talpa’s Mole Hole”. I stared at him incredulously, for like an hour.

1. I go to Curves all the time. Unfortunately, my favorite book store is on my way, so I rarely make it to Curves all the time. Lucky for me (and the world) I am naturally a hottie. To a book mole, a book store is like an opium den and crack house rolled into one. Some people say the age of the book store is over. To put it delicately, those people should die a horrible death. Southern Living Magazine has compiled a list of their top regional bookstores. It makes me want to take a road trip to Dixie. If you live in the American South, you might have frequented a few of these haunts. If your favorite southern bookstore didn’t make the list, tell us about it in the comments.

2. A new year always brings out the “Best Of…” lists. Quartz has compiled a “Best of-Best of” list of their favorite books. While we’re talking about “best of” lists, have you voted in the UBR 2017 Novel of the Year contest yet? If not, go ahead and read this article by Quartz, and then hop over to our Facebook page and vote!

3. Here’s another Best of list (sorta) from Inverse. It’s their nine most anticipated fantasy books of 2017. While these are all traditionally published, we suspect there may be readers out there anticipating some upcoming title releases from indie fantasy authors. What fantasy books are you looking forward to this year?

4. Former UBR Pitch Perfect Pick nominee and hybrid author Warren Adler (he wrote “War of the Roses”) has some thoughts on writing historical fiction. More specifically, he has seven thoughts he has shared with WriterUnboxed.

5. Book Pirates. It sounds like an old Monty Python sketch, but its real and kinda a big deal in the indie author community. David Kudler from Avast sails into troubled waters to warn authors about the dangers of this modern literary hazard. I thought I dated a real pirate once, only to find out he just the drive-through window guy at Long John Silvers.

That’s all for this week, I’ll see you next Monday. Between now and then, keep writing, keep reading, and try to stay away from social media (unless it’s checking out UBR’s daily posts! That’s okay.) Anyway, its time for me to go to the gym.

Or I could just sit here and paint my claws.