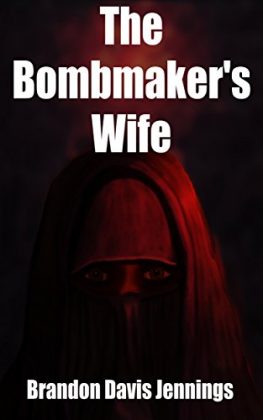 If you had a writing motto what would it be?
Stop talking about your idea and write it.

Where do you draw your inspiration?
I mostly draw it on Bristol board, but when I have to, I look to my past and try to understand why I made the choices I made, and when that isn't interesting enough, I place characters in situations that require them to make a choice that is interesting no matter what they decide. So, I guess, I look to humans and animals for inspiration when I am not drawing it on Bristol board.
What is one interesting fact about you?
I volunteered to go to Saudi Arabia before Operation Iraqi Freedom began and then was there when the war started all the way until George Bush declared Mission Accomplished. That was almost 15 years ago. I have a book of essays called The Red Book or Operation Iraqi Freedom is My Fault coming out that talks a lot about that time, and I can't believe it has taken me this long to get the book out into the world.

Have you learned anything from the self publishing process and would you do anything differently next time?
I have learned that writing a book is easy (for me.) What is difficult is selling books. Marketing is something that takes a lot of time and energy and it isn't something you can figure out in a day, which is also true for writing. But I spent ten years working on that, so it makes sense that it comes a lot more naturally to me than marketing does.

What has been your most successful marketing strategy?
That depends on how you measure success. If the goal is to get your book into as many hands as possible without caring about money, then free book giveaways have been my biggest success. If the goal has been to make money, then getting a book picked up by Kindle Singles and produced by Audible has been the best strategy. I do think it is important to want people to read your work and I think it is important to know your limits. So getting help from the right people is paramount if you want to make some money (and you should because you need money to live; I do anyway). So working directly with Kindle Singles has been the best thing for me as far as earning a living goes (and I do not mean that I earn a living off those books; I just mean that it is a step in the right direction: a small step).

What is the best kept secret you have found in regard to indie publishing?
It is hard work if you want people to value the work you do as an Indie author. You have to believe in your book so much that you don't care if people are sick of hearing you talk about it. You have to tell people that your book exists and show it to them again and again. It is easy to publish a book on your own in just a few minutes on Amazon or iTunes or wherever you like, but that doesn't mean anyone is going to read it, and even if you get your book published by Kindle Singles and produced by Audible, that doesn't mean anyone is going to read it. You have to work hard to reap any rewards at all and those rewards may be meager. It will be depressing some days. It will be exhausting some days. You will want to quit some days, and some days you may actually quit. But if you really need to write in order to be a whole person, then you'll start up again. I don't know if this is a secret for a lot of folks, but it was for me. All writers should believe their work has value; if you don't, then why are you writing. But the thing that I think we all need to hear from time to time is that you have to work damned hard to convince others that your work is valuable enough for them to spend money on. I loathe advertising, but it is something that must be done in order to get my books into the hands of readers. So I advertise. You cannot succeed as an Indie if you do not promote yourself. So don't be afraid. If your work is good and people know about it, then people will buy your books and share them with their friends. It takes time and persistence. That's the secret. Work hard and maybe it'll work out. Maybe it won't. If that sounds like too much work, then quit. There is already enough competition anyway.