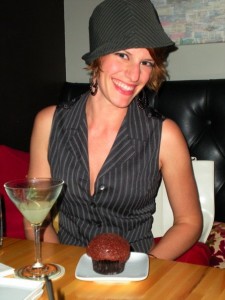 If you had a writing motto what would it be?
"Get honest, and go deep." Don't be afraid to be honest. More than ever before, indie authors are writing what they love, what they know about, and what they want to explore. Chances are, there are a lot of people out there who want to explore the same topic with you! I think the "old days" of restricted content because of "market preferences" are dying. People are starting to want deep, interesting, twisted, honest, raw and beautiful stories more than ever, not just the current market trend. And with indie publishing growing, we have a chance to write that way. So chuck those fears of "fitting in"! Get honest, and go deep.

Where do you draw your inspiration?
Anne Rice, Robin Hobb, Jacqueline Carey, and Stephen King, among others. My stories range over the epic fantasy/dark fantasy/sci-fi genres, but I love the detailed, gothic substructures of Anne Rice, mixed with the lush beauty and complex characters and kink of Jacqueline Carey. Robin Hobb weaves a complex epic like no other, and Stephen King provides a twist of the macabre to almost-normalcy, which fascinates me to no end. All four authors I would call "no fear" authors - they write dark, amazing, haunting, complicated, and beautiful work, and I strive to that level of impeccability.

What is one interesting fact about you?
I used to be a bellydancer! I still love it, still do it at home occasionally, but for quite a few years I was dancing professionally at weddings, birthdays, festivals, corporate gigs, you name it! I learned to dance in college from this amazing woman Adriane Dellorco, who now dances professionally in CA. Now I mostly rock out to the music and let it take my mind away to fantastic climes and mysterious worlds while I write. The sound of Middle Eastern music inspired one of my yet-to-be-released epics, the Key of Fire series, about a desert continent waking back up to life through the repentant efforts of a devastated fire mage. Coming soon!

Have you learned anything from the self publishing process and would you do anything differently next time?
Cross-promote! It's hard to get your work out there to your audience, and helping spread the word about other authors in your niche often gets them spreading the word about you! Especially ones who write in similar styles to your content, or with similar themes. I like to look around and randomly promote other people's work on my FB and Twitter, spreading the love. I didn't do this at first, and my books were very stagnant. Now, they're reaching a far wider audience, which rocks! We attract what we resonate, right? ;-)

What has been your most successful marketing strategy?
Strangely enough, freebies and Twitter! Making "Breath" (the first novel of my Three Days of Oblenite trilogy) free has really helped raise interest in the whole series, and a number of people have continued the series because they enjoyed the first novel free. And Twitter, well! I didn't use to believe in Twitter. "What is it?" I wondered, and felt very proud of myself when, "I finally hath twatted, my goodfellows!" My husband jokes that I'm a Luddite, avoiding all the pings and beeps on my phone. But after I developed a system of like-backs, retweeting other people's books, and posting daily, all my sales suddenly started going up. Go figure. It works if you work it!

What is the best kept secret you have found in regard to indie publishing?
Smashwords. I love that site. Post it once, get it distributed EVERYWHERE. And they really harness the power of Free. I got the idea of offering a free series-starter from a lecture Mark Coker (founder of Smashwords) gave, and it's great for generating more interest and sales of a series. Kudos to them for really supporting the indie author scene!