Sirocco, Storm over Land and Sea

Legends of the Winged Scarab - Book 2

After my 3080 BC-HF breech birth with KHAMSIN’S 150,000 words, I was done. Until an enthusiastic friend insisted she wanted more and mercilessly nagged me to write a sequel. The rest became (modern) history, as SIROCCO (Book 2) plays out during the 2011 Arab Spring.
However, its story is anchored in the fifty golden tablets (a major theme running through Book 1 - KHAMSIN, The Devil Wind of The Nile.
Then, my cover designer included a little winged scarab. The light bulb went on and the “Legends of the Winged Scarab” series was born (I actually went back and augmented a chapter in Khamsin to highlight the importance of the little dung beetle).
With Sirocco, I thought I was really done. Just to make sure, I blithely killed off my protagonists. Then, one of my loyal reviewers wrote (privately): “I want Jonathan laid, not “deayed.” (he’s a poet; hence the rhyme). With that, he cemented my protagonists’ love and saved their lives. He also opened the door for another sequel…After the Cataclysm (Book 3).

Sirocco, Storm over Land and Sea, is the present-day Book 2 of the "Legends of the Winged Scarab,” my historical fiction series about the mystery of Ancient Egypt.
This modern-day action & adventure thriller has tie-ins to Khamsin, The Devil Wind of The Nile (Book 1 - 3080 BC), as well as Sirocco's modern-day sequel, After the Cataclysm (Book 3), Book 4, The Crystal Curse, and Book 5, The Nile Conspiracy.
While a common threat runs through all volumes, each novel can stand alone.

Warning: Due to the stormy Mediterranean, a dose of Dramamine might be advisable. 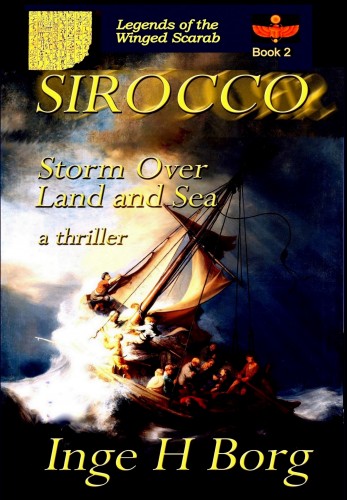 Scheduled for review – the information below will be filled out slowly. It will not be visible to the public until it is published on our magazine.
Tentative review date:
Reviewer: user last188
The Rating: 3.5 Stars (out of 5): Pretty good. For the right audience, this could be great. Sure, there were some issues, but it was still worth the read.

Trouble brews when Morsi-followers storm into Jabari El-Masri’s Cairo Museum lab and find two undocumented tablets ready for shipment to a secretive private buyer. Desperate, El-Masri insists they are slated for a Boston Museum exhibit. As the black unguent has to be removed first, Boston Egyptologist Naunet Klein is asked to assist in cleaning and deciphering these golden tablets on site in Cairo.

She never dreamed to fall for the charms of a shadowy handsome stranger. Nor had she and her two Boston colleagues expected to be embroiled in Egypt’s political upheaval, as well as an audacious theft which culminates in her being kidnapped. But a thousand pounds of gold bring out the worst in those who deal in illicit ancient treasures.

During a perilous sailing trip from the Red Sea to Crete, Naunet deciphers the two tablets. The inscriptions are dire predictions from an unknown culture predating even Egypt’s Old Kingdom. She also learns the truth about her murderous captors.

Meanwhile, her scientist colleague Jonathan Wilkins scours the Mediterranean for her whereabouts. Will the man who loves her be in time before Naunet’s hour-glass of life runs dry?

Cairo Museum director Jabari El-Masri is in trouble with Morsi-followers. He asks for help from Boston Egyptologist Naunet Klein, thereby sending her on a perilous journey through Egypt and the Mediterranean. Will the man who loves her be in time to save her?