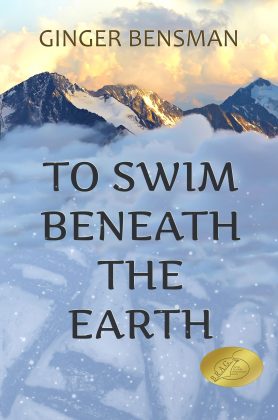 Megan Kimsey has the ability to see into the future and she also has vivid memories of living a past life 400 years ago. Her mother treats these visions as evidence of a mental breakdown and sends her to a psychiatrist for treatment. When several of her premonitions come to pass, however, Megan accepts the truth about her psychic abilities. After she foresees two major tragedies in her life, she decides to leave her home in Colorado and travel to South America. With the help of local archeologists, a past life hypnotist, and a medicine woman, Megan uncovers the story of her past life. It is a story with an incomplete ending and so she sets out on a dangerous expedition, hoping to follow through on a 400-year-old promise.

In To Swim Beneath the Earth Bensman serves up an appealing mixture of adventure, mystery, the supernatural, family dynamics and a dash of romance. The storyline may seem complex but it is also original and thought-provoking. Megan’s journey to a distant and foreign land serves as a medium for her to comprehend who she is and discover her own strength and true purpose.

This is certainly a beautifully written novel. Bensman is very descriptive and her language can be breathtaking at times: “There’s barely a sound, no wind, just the occasional groan of ice cracking. It’s as if God is holding His breath.” Bensman’s lovely writing carries the novel even though some of the descriptive passages slow the progression of the story. Some trimming may have improved the novel’s flow although the richness of the language is always wonderfully expressive. All things considered, this is a refreshing and delightfully imaginative book. It is both enjoyable and satisfying.

To Swim Beneath the Earth should delight readers who enjoy literary fiction and appreciate beautiful language. It’s a novel that pulls the reader completely into its world. Those who enjoy mystical fiction will certainly relish Bensman’s inventive plotline, psychic phenomenon and past lives. It may not be a good fit for readers searching exclusively for fast-paced action but will certainly satisfy those who revel in a rich story told with detail and depth.

Amazon e-book: $3.99
Amazon hard copy: $14.00
Visit the Official Website
Find it on Goodreads
More about To Swim Beneath the Earth on UBR

CANDI: Where did you get the inspiration for To Swim Beneath the Earth?

GINGER: TO SWIM really came about as an accumulation of ideas and images. For years, I was haunted by two different news stories, one, a newspaper article I’d read about a little girl from the American Midwest who died on the front porch of her family’s home during a snowstorm, the other, a feature with glossy photographs in the National Geographic about an Incan child that archeologists found sacrificed near the summit of El Plomo in Chile. The two children lived centuries and worlds apart, yet, in my mind, they kept converging.  Those two images became foundational when I began pulling together ideas to write a book about a young woman who has experiences that put her in conflict with the cultural and religious framework of her life. At one point in the novel Megan's father says to her, "Just because something's crazy doesn't mean it isn't true," and, at least for me, that statement is the fulcrum of the novel.

CANDI: You were able to create realistic characters, beautiful settings and a supernatural vibe. Tell us how you balanced realism with mysticism in your writing.

GINGER: Thanks for your kind words. I wish I could say that I was conscious of working to create that balance. I think the interplay between realism and mysticism is a result of the way Megan feels and interprets her experience. TO SWIM is written in the first person. The book is told from Megan’s perspective, often in present tense—what she sees and knows and believes. Every time I sat down to write, I tried to inhabit her character. She is a doctor and a scientist who is trying to make sense of the otherworldly, and often distressing experiences that are happening to her.

CANDI: In Colorado, Megan’s family acts as if something is wrong with her, but in South America, she is regarded as someone special. What role does culture play in the perception of Megan’s abilities?

GINGER: What I know of the world tells me that each of us is born into a family embedded in a larger community with a particular, and often unforgiving, system of expectations, prohibitions, and set of beliefs that dictate what is expected and that define what is normal. Any belief or behavior of a member that deviates too much from the norm must somehow be brought into compliance or the deviant person will be excluded from the group. Megan’s 1970’s family is mainstream American, middleclass, Caucasian, and Catholic, so Megan’s “episodes” that give her glimmers of that other life long ago, and her disturbing visions of the past and future require correction. In Megan’s case, her mother insists on psychiatric intervention.

In South America, the Spanish pillaged and colonized the land and the indigenous peoples of Ecuador and Peru, but they were never able to completely eradicate the Incan customs and religion. The result is that the indigenous peoples there live in a culture that exists on the fulcrum between Catholicism and the Old ways that predate the conquistadores, which is precisely where Megan finds herself.

CANDI: What were your sources for geography and history in this novel? What research did you do for Megan’s ayahuasca experience?

GINGER: Wow, that’s a complex question that covers lots of ground. First, let me say that doing the research for this book became a personal compulsion that literally took me years. I was fascinated and constantly surprised by the complexity and richness of the history of the Incan Empire and how limited and sometimes wrong many of my early assumptions turned out to be.

As far as my methodology, I started by covering one wall of my study with a huge topographical map that encompassed the geographic area of the Incan Empire, and included all the territories it conquered. Next, I read a number of scholarly histories of the Incas. Some mainstays included: Lords of Cuzco: A History and Description of the Inca People in Their Final Days and Empire of the Incas both by Burr Cartwright Brundage, and The Incas: The Royal Commentaries of Garcilaso the Inca edited and introduced by Alain Gheerbrant. These three references provided a good introduction, but there were so many really fine books about the Incas by scholars, archeologists and explorers that I depended on.

Once the plot and voice of the novel had gelled enough that I could chart Megan’s South American trek on the map, I began to research specific routes and locations with an eye for detail and emotional resonance. Wherever I was in the process, I had to keep in mind that the natural and cultural world of the Incas would be radically transformed by colonization, and that today’s South America would be different in many ways than it was in the 1970’s.

I approached Megan’s ayahuasca experience in much the same way, by researching hallucinogenic drugs in general and then by reading as many first person accounts of as I could find from people who had come back to tell about their encounter with “the little death.”

As for the geography and culture of Durango, Colorado in the 1970s, I was born and grew up in the shadow of the La Plata Mountains and I know that country by heart.

CANDI: The plot is quite complex. Can you tell us about your writing process and how you keep the details consistent?

GINGER: Once I had a rough idea what the story was going to be about, had decided that it would unfold on the spine of a journey, and had found Megan’s voice, I began writing the story in sequence, scene by scene. I followed Megan’s journey on my huge wall map, and used Microsoft’s OneNote, a digital notebook that allowed me to create detailed and evolving pages for timelines, geographic locations, and characters to keep track of the details.

I was organized, and I think that helped, but I don’t want to minimize the challenges. TO SWIM has a complex timeline that includes flashbacks and scene changes. There were whole chapters that didn’t make it into the final draft, and sometimes I literally spent weeks finessing a transition. Still, while I was working on it, I was totally immersed in the project, and though I was thrilled when the book was finally finished, I was sorry too. The novel’s been finished for over two years now, and I still miss seeing the world through Megan’s eyes.

CANDI: How was your experience publishing the novel?

GINGER: Indie publishing has been a learning adventure and a lot of work. There were so many aspects of published books that I took for granted and barely noticed before I published my own—all those beautiful enticing book covers, the many conventions and nuances of formatting (who knew that fonts, all by themselves, were an art form!), everything from pagination, to running headers, to when and where to indent. And when that’s all said and done, there’s marketing. Hands down, marketing has been the most challenging part of Indie publishing for me. Like so many of my author friends, I’m an introvert, and I’d rather be at my desk writing my next novel than making a pitch or managing a marketing plan. But I’m learning how to find balance, and in the process, I’ve discovered a vibrant, supportive Indie community ready to answer questions and offer help. When I publish my next book, I think it will be a lot easier.

CANDI: What projects are you planning in the future?

GINGER: I’m currently working on a novel about two elderly sisters who haven’t always seen eye-to-eye, and how they navigate, sometimes together, the grace and the indignities of aging.


Visit the author’s website
Read To Swim Beneath the Earth