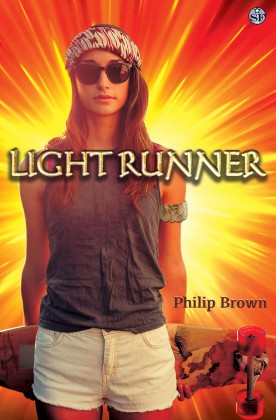 Dara is an ordinary teenaged girl who comes upon an extraordinary find in Light Runner by Philip Brown. Living in an apartment with her dad, while mourning the recent loss of her mother, Dara discovers a silver and gold armlet in the apartment complex swimming pool. It emits an iridescent light and warmth, and then suddenly heals her knee injury. It seems to be good fortune finding this miraculous object, but it quickly starts looking more like a curse. Strangers follow her, her apartment gets broken into, she stumbles over a dead body, and her father goes missing. What follows is Dara’s quest to find her missing father and understand the significance of the healing armlet called the Jyotisha. She does her best to avoid the police as well as the mysterious Gunarik who is after her, but a video that captures her healing with the Jyotisha goes viral. Everyone knows who she is and it becomes harder to hide. With the help of a dog and her new friend Diego who she meets on the streets, Dara is determined to make sense of why all this chaos has found her.

Dara is a likable protagonist. She’s strong and smart, and she cleverly finds her way out of the most difficult situations. She takes matters into her own hands and sets out to save her father and defeat the bad guys without any adult help. While her reasoning for not getting help from the police is a bit of a stretch, it does make for an exciting story. Life on the streets of LA with other runaway kids enlivens the atmosphere, and Dara’s ability to stay hidden keeps readers cheering for this crafty teen. The healing Jyotisha also brings intrigue to the storyline. Its relation to her family’s past and its magical powers give an interesting supernatural element to the novel.

Brown’s use of dialogue to explain the plot is one of the novel’s downsides. Authenticity is lost when dialogue sounds more like the author talking to the reader than the characters talking to each other. At times, the characters’ motivations are not convincing but simply necessary to keep the story moving forward. Brown explains why some of the unrealistic things happen, and it helps readers understand the storyline, but it doesn’t allow the characters to honestly come to life. If he could have kept a more natural tone, and let the characters be more genuine, it would have been easier to fully immerse into this unique story.

Light Runner is for readers who would enjoy following the mysterious and supernatural adventures of a determined teen protagonist. Those who like rooting for an unlikely hero will enjoy Dara’s quest to survive the LA streets on her own. Readers more interested in an exciting plot than character development will more likely find this book entertaining.

CANDI: Tell us about your inspiration to write Light Runner.

PHILIP: The number one inspiration for writing Light Runner was the amazing young people I have known, many of whom have overcome incredible odds to succeed. Not every kid has run away from home and lived on the streets (although I’ve known teens who have), but so many have lost parents, siblings, cousins. I work where there is gang violence and although that is not an element in my book, the effects of death and hostility leave lasting impressions on young people. Many are, like Dara, thrust into adult modes of survival at a young age. But I also believe in the transformative powers of love and human connection to heal emotional wounds, and tried to convey that in the pages of Light Runner. Dara carries a heart-wound that her healing armband cannot relieve, but that is what gives her power. Our emotional hurts can sometimes become our greatest sources of strength.

CANDI: What helped you get into the mind of a teenage girl like Dara?

PHILIP: Working around young people and having a daughter of my own really helped. I also grew up with three strong sisters and a mother who is the embodiment of pluck and fortitude. I saw girl power every day in my home. I knew that I wanted my protagonist to be a teenage girl with untapped power and strength. Dara is forced by outside events to reach down deep and find strength she never knew she had. She’s just a suburban skateboarding girl, kind of a slacker, but when the chips are down she’s got to rise to the occasion. My own experience as a teenager was also a great help in forming Dara’s character. In some ways, she’s a female version of me. I was a rebel who learned early in life that if I was going to survive, I‘d have to find the inner means to enable me to do that. It wasn’t even a conscious decision, but rather a result of life circumstances where I had to fall back on my own resources. There were times writing Dara’s character when I was right there inside her head, seeing the world with a combination of apprehension and resolve.

CANDI: What kind of research did you do to bring to life of the runaway kids on the streets of LA?

PHILIP: Great question! I’ve read a lot about the recent explosion in teen homelessness, part of the overall burgeoning homeless population, and I’ve talked to a number of runaway kids. Nobody’s run for the same reasons as Dara—mom gone, dad missing, finding a mysterious armband that can heal wounds, people after her. But many—like Diego and Becca—are fleeing abusive homes. Foster teens who’ve never been adopted become emancipated at eighteen and are thrown out into the world, often with few skills and little support. Many of those do become homeless. I’ve lived close to the streets of L.A. and Hollywood, knew lots of street people, and I drove a cab at night, got to know the streets up close and personal.

CANDI: How did you come up with the supernatural element in the novel?

PHILIP: At first, the story was going to be a teen mystery—Nancy Drew on a skateboard. But writing a novel, I discovered, is like peeling back the layers of an onion. Peel back enough layers and you find the core. The book did not start out as a fantasy, but as I peeled back more layers, that’s what I found.

I originally got the idea for the armband from a book called Autobiography of a Yogi, which describes an astrological “bangle” made from interwoven gold, silver, and copper, designed to combat “the adverse effects of subtle cosmic influences.” That’s a far cry from Dara’s Jyotisha, which can heal a gunshot wound, but part of the writing process is taking an idea and molding it into a different shape, seeing what it can become.

Astrology—especially as it is practiced in India—has been a strong interest of mine for quite some time and prior to Light Runner, I wrote a couple of astrology books. The Indian form of astrology is called Vedic astrology, or Jyotish. Jyoti is a Sanskrit word meaning light, and Jyotish is the study of star or planetary light. I liked the word mainly for its overall meaning—light—as it applied to Dara’s armband and simply added an “a” to it.

In addition to interpreting the influence of the planets (although with a different system than Western astrology), Vedic astrology uses gems for healing and to ward off maleficent karmic influences. For example, if a Vedic astrologer foresees the future onset of an illness, the astrologer may prescribe the wearing of certain gems to counteract that illness.

CANDI: What has been your favorite response to the book by a reader?

PHILIP: From an Amazon reader review: “Philip Brown has captured the gritty angst of a teen on the streets in a way that kept me as close to Dara as her skateboard. Brown's style is very engaging and kept me turning the pages. Great plot, heartwarming connections among characters and the overall message of love and empowerment make this a good read for any age.” I loved that this reader used the words “love,” “empowerment,” and “connections” because those were key themes I wanted to convey in the story.

CANDI: Tell us about the publishing process.

PHILIP: I sent out 156 queries and submissions to agents and publishers. Most resulted in rejections or no response. Sometimes there’d be a request for a partial or full manuscript, but those never seemed to lead anywhere.

They turned out to be wonderful. My book got the attentive editing support it needed to bring it to the next level. Vagabondage—a small, quality press—has been great in terms of promotion and doing as much as they can to get my book into the hands of reviewers. Authors with any size publisher today have to do marketing and promotion, so I try to be a good student and learn as much as I can. I’ve had to learn how to use social media in new ways—something I am still learning.

One other thing I found out during the publishing process: the royalty terms with a small press are fairly competitive with self-publishing. That’s another effect that the digital publishing revolution has had on indie publishers. They are competing for authors with Amazon’s KDP and CreateSpace. If I had been offered royalties like I had on my first astrology book—10%, which was the norm for a first-time author a decade ago—I would have been better off self-publishing (which I did with one of my astrology books). I can’t speak for other publishers, but my experience with Vagabondage has been very positive, and I’m very grateful things turned out the way they did.

CANDI: Are you working on another novel? If so, can you tell us a bit about it? If not, what’s next for you?

PHILIP: I am finishing the sequel to Light Runner. It picks up where the first novel ends. Book Two will focus on Dara’s discovery of her hidden family past and the secrets it holds. Her mission becomes more global, and the healing armband—the Jyotisha—is revealed to have world-altering powers that were only hinted at in Book One.