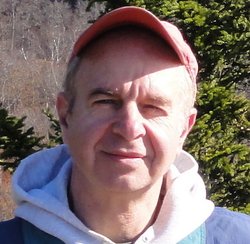 More about Interview With Robert Klose on UBR

Robert Klose is the author of Long Live Grover Cleveland, a hilarious satire on academia, his first novel. His previous works include Adopting Alyosha: A Single Man Finds a Son in Russia, chronicling his quest in finding and bringing home his first son; two essay collections, Small Worlds: Adopted Sons, Pet Piranhas, and Other Mortal Concerns and The Three-Legged Woman and Other Excursions in Teaching; and a children's book, The Legend of the River Pumpkins.

LYNNE:  You're a college biology professor who writes stories (fiction and nonfiction). I feel a certain kinship with you. How and when did those two interests come about and how did they converge into your writing about a small college campus in Maine?

ROBERT: Most writers in America have a day job. I'm fortunate to have one that gives me an embarrassingly generous amount of time and freedom. Teaching and writing is a time-honored combination. Until now I've written almost exclusively non-fiction, because I felt that it came easier to me. But after marinating in the culture of higher academia for many years, and bearing witness to the often amusing and sometimes unbelievable circumstances that tend to erupt in such a closed system, I felt that only fiction could do it justice. That's when I decided to write Long Live Grover Cleveland.

LYNNE: Is there a certain character--or faculty member--at Grover Cleveland College who you particularly relate to, or who is your favorite--who and why?

ROBERT: I keep gravitating to Brisco Quik, the character who took the longest to develop. I don't think I'm as brash or impulsive as Brisco, but I identify with his sense of justice and the need to pull out all the stops when he feels that a wrong has been done.

LYNNE: I kept finding myself turning to the front cover to see the "yearbook" photos of the Grover Cleveland faculty and staff, and the author. I've been dying to know a little bit about that design, especially if those are stock photos, or friends and family?

ROBERT: My contract stated that I was allowed input on the cover, but that the ultimate design was up to the publisher. I take no credit for what they came up with. I assume they are all stock photos. At first I wasn't sure what to think, but the peace symbol they made out of the "o" in the "Long" of the title is, I think, a masterstroke. For baby boomers like me, it defines an era, and it says a lot about what the reader will find once he delves into the book.

LYNNE: Who will be in the cast of the movie version of Long Live Grover Cleveland?

ROBERT: You're not the first to ask me this. I am so out of touch with who's who in the acting community that all I can do is throw up my hands and leave that judgment to people in the know. If Charles Durning were still around, though, I think he'd made a great Marcus Cleveland — the bumbling but well-meaning president of Grover Cleveland College.

LYNNE: When not writing, what do you read? Favorite author(s) and why?

ROBERT: I read as wide a variety of literature as possible, and I do it systematically. Next to my bed I keep one volume of each of the following genres: fiction, poetry, history, biography, miscellaneous non-fiction. When I am done, say, with the poetry volume, I replace it with another. It's the only way I can maintain balance and stay informed as to who is writing what. My favorite author is Isaac Bashevis Singer, a writer's writer. He's the only scrivener who is able to seduce me from the first sentence. Others I honor are E.B. White, E. Annie Proulx, Paul Theroux, Annie Dillard, William Stafford, Anton Chekhov. The list goes on. What these favorites have in common is a prose that sings and an ability to move the reader with relatively simple language and an economy of words.

LYNNE: What is your writing method: Do you start with a story idea, a scene, a cast of characters? Plotter or pantster? Any writing rituals?

ROBERT: I begin with an idea but rarely have a sense of how a story will end. I write first thing in the morning and try to do 500-1000 words before getting up from my desk. I consider that a good day's work and anything else I accomplish during the rest of the day is pure gravy. When I return to my story the next day, I think in terms of checking in to see what my characters are up to. I'm always very anxious to see where they will take me next.

ROBERT: I had the most engaging freshman English comp teacher in college. She's the one who first encouraged me. Today, all these years later, she still reads and critiques my work. I guess what I'm trying to say is that I have a guru who knows exactly what she's doing, and she is the first line of defense I must overcome when writing a piece for publication. Having that "other" person to provide constructive criticism — rather than praise — of one's work is an invaluable asset.

ROBERT: I'm well into a somewhat dystopian novel about a near-future time in America where, due to a political catastrophe, there has been a total collapse of faith in science and technology. Urban myths and pseudo-science have rushed in to fill the void in an America that has been taken over by people who deny that we went to the moon but believe Bigfoot is real. When I describe this to people and they tell me they don't know whether to laugh or to cry, I know I'm on the right track.

LYNNE: Thanks for spending some time with us, Robert. I've enjoyed getting to know more about you and your writing, and look forward to reading more of your work!