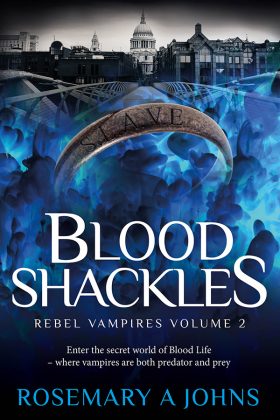 Blood Shackles is the second book in the Rebel Vampires series. Book One, Blood Dragons, introduced us to the quirky and likeable character of Light, a delightfully British vampire. Like the first book, Blood Shackles is narrated by Light, who is writing his journal and divulging his deepest, darkest thoughts and emotions. In book one, he was addressing Kathy, the human love of his life, as she lay dying, ravaged by old age and dementia. Things are rather different in Blood Shackles, as Light’s journal is addressed to Grayse, his owner. For Light, is now a vampire slave. He’s been bought and sold by the underground Blood Club. In the first few chapters Light explains via the journal how he was captured, as well as how he is adjusting to life as a prisoner. Interestingly, there is already a flicker of attraction between Light and Grayse, who, fortunately for Light, is nothing like her monstrous father and sister. She runs the financial side of things but has agreed to keep a vampire slave herself in order to learn more about them. As Light fulfils his duties, in return she gives him things he wants, such as a leather jacket and a new motorbike. She slowly enables him to feel like Light again, and her equal. At the same time, he writes the diary, detailing the horrific abuse and ‘training’ he received prior to becoming her slave. As Grayse becomes increasingly shocked and horrified about the treatment of the vampires, she and Light devise a plan to release two of Light’s friends and take their revenge on the Blood Club. In many ways, this is a far darker and more uncomfortable read than the first book. There are frequent scenes of torture, and sexual abuse and humiliation as Light is forced to relive his training. I found the protagonist to be a more diminished character in this book, due to his ordeals, but I still liked him immensely. It took me longer to warm to Grayse. Although it was obvious from the start she had no idea what cruelty was inflicted on the slaves, it still took me some time to see her as a real person. As with the first book, I appreciated the way the story was told, through Light’s words and offerings to his journal. Although it makes uncomfortable reading at times, it is a true page turner which keeps you guessing. The ending and the dramatic rescue and escape scenes were breathtaking. A shocking book and not for the faint hearted, but one I would recommend to fans of the vampire genre, as well as anyone looking for a unique take on the vampire story, with a truly likeable protagonist-narrator.

Light is a British vampire, who has been captured by the ruthless Blood Club, an underground society who deal in vampires, training and selling them as slaves for the rich. Defanged and ‘trained’ into a life of subservience to his new ‘owner’ Grayse, Light feels a long way from the rebel he once was. From the start though, he realises that Grayse, whose father owns the Blood Club, is not like her family her at all. An attraction grows, family bonds are tested, and as Light writes his diary to Grayse, detailing the horrendous abuse he has suffered, the two of them devise a daring plot of rescue and revenge. A shocking and at times uncomfortable read, this dark book leads us deeper into the world of vampires and their enemies, and sets the story up for book three.

Amazon e-book: $2.99
Amazon hard copy: $13.49
Visit the Official Website
Find it on Goodreads
Like it on Facebook
More about Rebel Vampires Volume 2: Blood Shackles on UBR