Review of Alaana’s Way: The Calling by Ken Altabef 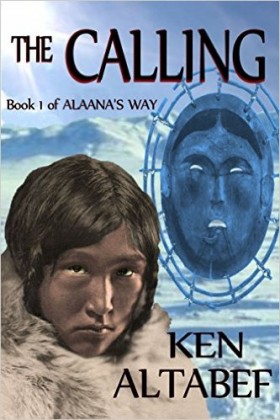 Ambitious. That’s how I would describe Ken Atlabef’s saga of a twelve year old Inuit girl and her perilous journey of transformation. In bringing THE CALLING to life, Altabef had to tackle several formidable challenges. Not only did he have to bring a native American culture to life for the average reader, but make their legends and spiritualism real. He had to do all this through the eyes of a young girl.

Alaana is a young Inuit girl on the edge of womanhood. Her tribe, the Anatatook, thrive somewhere in the frozen north. In this world modern technology is unknown and white men are only distant, seldom encountered trading partners far to the south. The story opens with three shamans fighting a desperate battle against a deadly fever ravaging  Alaana’s people. This novel quickly sets itself apart as the author treats the spiritual world no differently than the real world. In the course of the story, the venerable shaman Manatook reveals Alaana is destined to become a shaman, and personally undertakes her training. However, women are not supposed to become shamans and  Alaana finds herself torn between the calling of a powerful god, and the equally powerful call of her family. However, there is something Manatook isn’t telling her about her calling, and his own past.

The story starts quickly, and then settles into a rhythm which alternates between three distinct settings. The first setting is daily life in Alaana’s tribe as they struggle to survive on the frozen tundra. Altabef does an excellent job breathing life into the heartaches, joys and conflicts of Anatatook life. He makes Alaana’s family life real and relatable, despite the huge cultural barriers he must overcome to translate a very different culture into our own. No doubt, some readers will be dissuaded by the difficult names, but that’s not the authors fault. In fact, Altabef masterfully compensates for this by quickly imprinting each unique character into the reader’s mind.

The second setting is the spirit world where Manatook takes Alaana during her shaman training. These journeys are wrought with wonder and peril and are beautifully written. Here, Alaana finds both friends and terrifying enemies.  To the reader, these spiritual  characters become every bit as real as those in the flesh and blood world.

The third setting isn’t really a place, its the relationship between Alaana and her mentor, Manatook. I say that, because together, Alaana and her mentor exist in a place between worlds and become catalysts for events in both.  Not only are they catalysts, they are lynchpins, bending and fusing the two realms into one.

I can say so many great things about this novel, from the dialogue to the sweeping scenery to its solid editing. While I think Altabef succeeded bringing this ambitious vision to life, there were a few minor issues. Sometimes the switch between settings could be a bit jolting and confusing. Also, he often switched character perspectives from paragraph to paragraph, making the blending of the spiritual/physical characters difficult to sort out.  It tended to slow down in a few places, too. While Alaana’s interactions with her family, tribe and spirit creatures were fascinating (and well written), about halfway through the book I wanted the overarching conflict to reveal itself more clearly and the story to progress.

This cross-cultural fantasy epic may not be for everyone, but THE CALLING is my kind of book. Original in both scope and execution, I highly recommend it.

For readers who liked these books and authors: Clan of the Cave Bear, Jean M. Auel