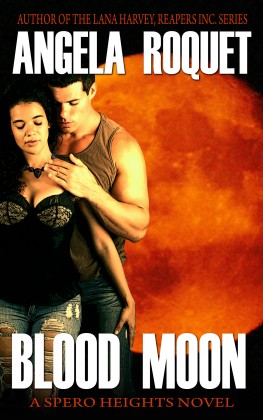 Dr. Zelda Mae Fulmen hasn’t lived in the small town of Spero Heights long. She bought the old movie theater and converted it into a pub, with a set of apartments upstairs. She fills those apartments with werewolves—abused werewolves from a derelict, neighboring pack whom she takes in and nurses back to health. It’s true she’s a doctor, but she’s also something more, just like all the residents of Spero Heights. But her particular something more is her closely guarded secret.

Logan Chase is a local werewolf who lives on a farm in Spero Heights. His sister, Selena Chase, is on the town council, and she is very suspicious of Zelda. Logan works at Zelda’s pub, in part, to keep an eye on what Selena considers to be riffraff. Logan, although in agreement with his sister about the riffraff wolves, has an ulterior motive: he has the hots for for Zelda.

Events take a troublesome turn when Zelda’s most recent runaway is the abused pregnant wife of alpha of the neighboring pack. The pack was willing to let the others go, but not her. When the pack comes after her, Zelda must take drastic measures that put her, and the rest of Spero Heights, in danger. Her secret past comes back for her in a deadly way.

Blood Moon was a very enjoyable novella. Zelda’s past pain that still haunts her is believable, and the anger that she incited against her with her actions are believable as well. Stories can live and die by their backstories, and Zelda’s is strong. The plot moves along at a good clip, readers will find themselves eager to return to it.

The book’s only weakness was that it is a novella, and therefore, short. There were many places where events occurred too quickly, without enough build-up, or where characters acted in ways that were surprising because their motivations were undeveloped. At 150 pages, Blood Moon, in some places, gives its characters short shrift.

Of course, the flip side of this criticism is that the story was so good that a reader would wish there were more.

A strong paranormal page-turner, perfect for a weekend read. The start of a series, but ends without a cliffhanger. Look for more from this author.