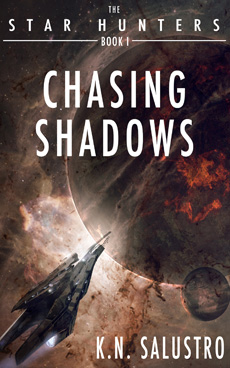 At the beginning of Chasing Shadows, Lissa sits in a tree watching a star port, waiting for a ship’s passenger to arrive. While she waits in the dark, she thinks of the medical bills piling up for Aven, the only person who seems important to her—not counting her pet arkin, Blade, who isn’t even a person, but rather a large, winged feline animal that can form close bonds with humans. Blade and Lissa sit in shadows; the passenger appears; and with one shot to his skull, Lissa takes his life. After all, Lissa is a bounty hunter with bills to pay. But as she makes her way off world, her carefully planned escape falls apart. The smugglers she hired to take her back to her home world have sold her out—not realizing they were dealing with something far worse than Lissa herself.

So begins a space opera of the classic kind. It is galactic in scope, with a deep history of interstellar wars, and interplanetary life currently under an unsteady peace held by the police-like Star Federation. Early on, we watch a space battle in which a Star Fed ship led by a brilliant young commander, Lance, gets handily demolished by a mere ten enemy soldiers. The soldiers—assassins—appear to be a little bit more than human, just like their prey, Lissa. Who are these people? What do they want? To what ends are they willing to go to get it? The stage is set for that unsteady peace to fall apart.

Chasing Shadows was hard to get into at first, in part because the two main characters, Lissa and Lance, are both so self-possessed and reserved that their personalities not only keep other characters at a distance, but the reader as well. It is possible to write secretive characters who are instantly captivating—who, perhaps, share their secrets with readers more quickly than these characters do. Or perhaps having both main characters be secretive is just too tough to pull off. It is uncertain whether all readers will have the patience to get to know Lissa and Lance despite how intriguing they promise to be.

Once Lissa and Lance come fully into view, however, the book really takes off. At one point, they’re fighting over their next move, and Lance accuses Lissa of holding out on him. She takes him to task: “There will always be something I’m not telling you. Always. But what I do tell you will be the truth.”

Note: The book ends on a cliffhanger, setting up a series.

Perfect for science fiction fans, especially those looking to dive into a new series. Both Lissa and Lance are compelling characters, and it is worth taking the time to get to know them. A great book.