Review of GANGSTERS OF SHANGHAI by Gerry O’Sullivan 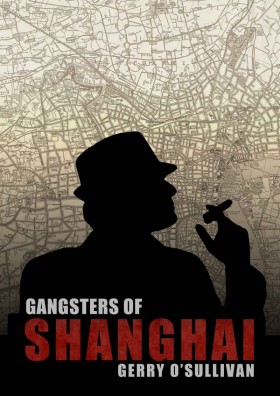 The severed head in the bamboo birdcage, swaying above the marketplace, told Constable Mike Gallagher everything he needed to know about Shanghai. It’s 1927, and Gallagher, the son of a rural Irish cop, joins the Shanghai Municipal Police to escape an Ireland crippled by its recent bitter independence fight, and to trace the aristocratic woman whose memory still haunts him. They would venture together to China, Fiona once promised. Then the IRA torched her family estate. Everybody believes she died there. Everybody but Mike Gallagher.

Shanghai is a cesspool of poverty, thronged with refugees, gripped by civil war. But for some it’s still a fever dream: jazz clubs and opium dens, celebrities and spies, easy money and easier women. Gallagher encounters the city’s biggest philanthropist, a man called Big Ears Lu – who is also its creepiest racketeer. He falls for the beautiful courtesan Miriam Tsai. But does his collusion with Lu keep her trapped in the House of Multiple Joys?

Gerry O’Sullivan’s portrait of Jazz-Age Shanghai is pungent and lush. “Streetside butchers beheaded chickens, trails of ash from their cigarettes floating down onto the meat. Entire refugee families sat kerbside, slurping bowls of noodle soup. A wind-up gramophone shrieked out the discordant wails of Peking opera, while across the street another gramophone drowned it out with an Al Jolson song.”

Action shifts back and forth between Shanghai in the late 1920s and early ‘30s, and the slightly earlier Troubles in Ireland. These are eras in history that I know little about, and O’Sullivan’s rich descriptions and clearly extensive research brought both alive.

Constable Mike Gallagher is the well-meaning but weak-willed son of an honest Irish cop. He quickly develops a taste for the expensive things on offer in Shanghai’s bars and brothels, which entangles him with the city’s biggest and most dangerous gangsters: Chinese mafia don Big Ears Lu; corrupt cop Jack Dell; and the British businessman Jamie Flyte.

The plot (which would be complicated to explain and whose thumbnail sketch wouldn’t, in any event, help you to decide whether to read the book) is woven through with Gallagher’s fevered dreams, hallucinations, imagined and perhaps real sightings of his aristocratic childhood love. Gallagher’s father died in the line of duty when the IRA burned down Fiona’s family’s estate, making for a double tragedy that seems to affect most every decision Gallagher makes thereafter.

O’Sullivan’s first novel is a treasure trove of historical information and a fully realized portrait of a complex, exquisite, and cruel place. I was not as concerned with the plot, though it was a fast-paced and well-constructed tale.

Sometimes the characters in the novel felt a bit too stereotypical and one-dimensional. More—and better—dialog would have served it well. But these are small things to get past in order to enjoy the vivid descriptions in Gangsters of Shanghai. I recommend this to anyone who enjoys reading well-researched action stories in order to understand history.