Review of GROWTH AND CHANGE ARE HIGHLY OVERRATED by Tom Starita 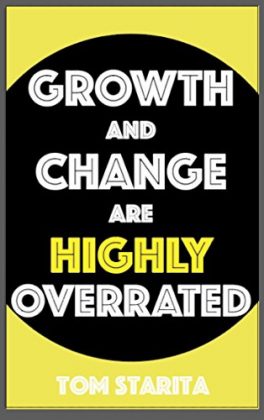 Lucas James is a musician. He has an inner rock-god dying to come out and it’s only a matter of time until he makes it to the big time. He can’t let small things like paying rent or working a day job get in his way. But his fiancee, Jackie, has had enough of waiting and supporting him. She walks out, leaving Lucas with a broken heart and an empty bank account. With his rent coming due, Lucas needs to find a way to get the money together and get his life on track. But how can he stay true to himself and his musical ambitions if he sells out and gets a job?

Reluctantly, Lucas finds himself employed in the stockroom of “That Store.” There, he battles a power-crazed manager, tries to avoid the enormous puppy of a coworker who has declared them best friends, and maybe catches the eye of an attractive cashier. Oh, and he steals everything that isn’t nailed down. As Lucas’s life settles into its new normal, he has to decide whether compromise is a necessary evil or if, as the title suggests, growth and change are, in fact, highly overrated.

Lucas is charming and his narration is breezy and fun to read. The first half of the book is hilarious. The reader can simultaneously cringe at and sympathize with Lucas’s immensely entitled attitude as he tries to pull his life back together. It loses some steam by the second half, adding some plot twists that take away from the lighter, zany atmosphere of the beginning while not providing much in terms of narrative development. Overall, Growth and Change Are Highly Overrated is a fun trip into the psyche of that one irresponsible friend.

Fans of slightly off-beat comedy and rock and roll will enjoy this one. However, if you’re looking for deep reflection and character revelations, this isn’t the book for you.