Review of HARVEST OF EVIL by William Lehman 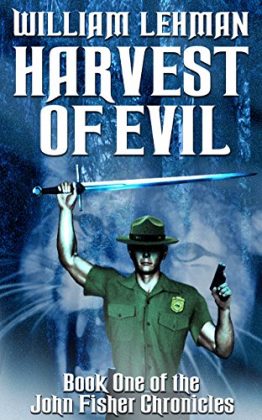 Harvest of Evil starts with John Fisher on patrol. His patrol area is quite a large patch of State Park in Washington. It’s an urban fantasy setting were all sorts of monsters and were-creatures exist. Officer Fisher is one or them, a were-cougar whose civil rights are only a few decades old.

He is also something darker, but that information is kept from him his whole life. From one quarter out of shame, from another quarter so that he could be used as needed by the government that would rather kill things like him on sight. In the course of investigating the death of illegal weed growers, Fisher discovers his hidden heritage and perhaps something that might bloom into true love.

If they can stay alive long enough.

One of the most marvelous things about this novel, is how the prose reads like the observations and experiences of a detailed orientated cop without actually feeling that it was written by a cop who writes up so many reports that it’s second nature. I certainly got the feeling who John Fisher was, even if he’s not someone I’d be buddies with. Of course, part of that is I like my were-critters to be sexy. Cool. So, if you are looking for Anita Blake like Weres, John Fisher isn’t one of those.

But what John Fisher is, rough and yet smarter than he’d like you to think, he is in a totally realistic way. The supporting cast carries this verisimilitude across the book with only two clunkers of minor characters. I’m referring to two total twits in suits that remind of cops from an accidentally deadly traffic stop. Yet, in this first person narrative, it is realistic that John holds them in such disdain that they do not actually come across as realistic.

The dialogue is witty when John is not trying to be witty, and often not when he’s trying to be. The other characters often have better dialogue, which is amazing to me.

It’s almost a police procedural, which I enjoy when done correctly (and this was). When a book isn’t going to be a straight procedural, I like to have seen more romance and more introspection. But, true to type as a military man, just kinda says he blows his top and rushes through through the moment until he is out of emotional upheaval. It’s realistic… just not as satisfying as it could be.

I’m interested in reading more in the series. If William Lehman can adjust the mix a little, John Fisher could become quite the popular hero. Or Anti-Hero.

For readers who liked these books and authors: Robert Heinlein, Tony Hillerman