Review of My Life as a Sperm by William Darrah Whitaker 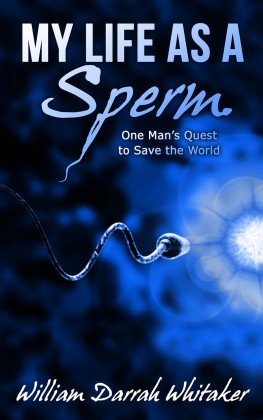 Hollywood agent Buddy Price is the last person you’d want to depend on to be a selfless hero, but after he dies in a car crash, he puts his agent-negotiating skills to use and convinces God to give him a second chance. All he has to do in return is save the world.

Even with the fate of the world in the balance, the flippant, jaded Buddy can’t refrain from opening his mouth at the wrong time to the wrong people, getting himself deeper and deeper into trouble. Eventually, he’s pretty much pissed off everyone, just when he most needs them on his side–or at least to have them not beat him to a pulp.

With some unlikely helpers, including his ditzy-loveable personal assistant, Stacey, Oliver, the homeless beggar from outside his office, and Mary, a young, attractive escapee from a survivalists’ compound, Buddy gets himself in, out, and back into mess after mess. As Buddy chases after the secret to saving humanity hidden in the Jeremiah Box, he finds he’s not the only one after it. With all sorts of people with all kinds of motives after him and the Box, there’s plenty of trouble for him to get into, resulting in some hilarious and hair-raising encounters.

The author’s background in screenwriting is clear and Whitaker’s characters all have depth and complexity that comes across in well-written, believable dialogue. The plot has a lot of surprising twists and turns, so much so that a few times it almost seems contrived. But, just when you think too many coincidences have line up too conveniently, Whitaker manages to throw in an unexpected curve, keeping it entertaining from beginning to end. And while some of the action scenes may have been lifted straight out of a few thriller blockbusters, they seem like a wink-and-nod to those movie stock scenes than rip-offs of them.

Overall, My Life as a Sperm is a great read with excellent writing, editing, and storytelling. Although it would be easy to get preachy or pedantic with the themes he addresses, Whitaker never does, leaving the reader chuckling at Buddy’s exploits, and maybe even pondering good and evil, God and Satan in a new light.

This is a great read for anyone, and especially those who enjoy a great send up of pretty much everything. If you’re serious about your religion, or get offended by cartoon-like characterizations of your deity, you might want to steer clear of this since believers, get the same dose of skepticism and satire as the nonbelievers, and God wanders through the kitchen in a plaid bathrobe.

Amazon e-book: $2.99
Amazon hard copy: $16.99
Visit the Official Website
Find it on Goodreads
Like it on Facebook
More about My Life as a Sperm on UBR


Read My Life as a Sperm