Review of NOT EVERY GIRL by Jane McGarry 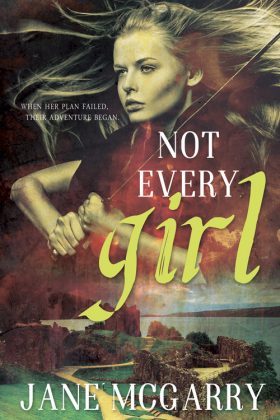 Set in the kingdom of Stewartsland, protagonist Olivia Davenport aspires to one day become a Knight and serve under the command of the Master-of-Arms who so happens to be her father. While her sisters play house and keep up with the latest Mainland fashion, Olivia trains with the squires and discusses battle strategies with her father. Her father supports her, happy to see in her the son he never had, but her mother strongly disapproves. Her parents forged a compromise and Olivia was to stop her training when she became seventeen.

Now, the time is alarmingly close and her father announces that the oldest class of squires will join him and a few knights to accompany the King on an important mission. It can be the great adventure that will test her skills. It is the chance of a lifetime—and Olivia is not allowed to go.

Dismayed but still unyielding, she disguises herself as a boy, already anticipating her plan’s inevitable failure. But she’s going through with it anyway. What she does not expect is the consequences that will place her in the middle of a horrifying plot against the King. Alongside the seemingly condescending Prince Liam, Olivia encounters outlaws and fights mercenaries in what would become the true great adventure of her life.

The small similarities of Disney’s Mulan with this book are not unnoticeable, although the two heroines were led by different circumstances. Olivia is a strong female character who is more than competent to fight men in either a battle of wits, swords or both. However, the way she executed her plan made her seem selfish and without a care for how others will be affected. Perhaps this strong will and stubbornness is a double-edged sword. This is why Olivia is not exactly everyone’s likeable character but definitely a relatable one.

Then there is the issue of her and Prince Liam’s relationship. Insta-love, what happens when two characters who recently met thought they found their soulmate, is slightly present in the story and the chemistry between Olivia and Liam isn’t exactly palpable.

Still, Jane McGarry’s debut novel brings readers into a well-built world and an action-packed story about exceeding society’s expectations. Though the end was predictable and the characters can be developed further, overall, the book is an enjoyable light read and gives enough room for the story and its characters to grow in the sequel.

With action-packed scenes, a strong (albeit imperfect) female protagonist and set in a well-developed world, this story is for those who want a light and refreshing read about being brave enough not to live up to what others expect you to be and forging your own path. Readers who are looking for an extremely empowering female character, wholly perfect and strong, will not find one here. But if a flawed and relatable teenage protagonist is right up your alley, then this book is for you.

3 Stars (out of 5): Pretty good. Sure, there were some issues, but it was still worth the read.


Read Not Every Girl