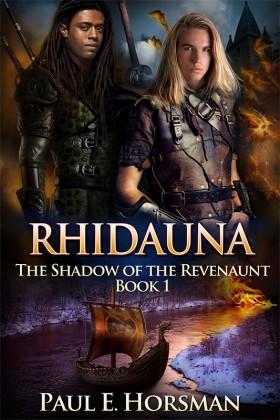 Rhidauna: The Shadow of Revenaunt by Paul E. Horsman is the story of Ghyll, a young Baron, sent on a quest by his dead uncle to recover several artifacts after his island home of Tinnurad is destroyed mysteriously one night by fire-breathing birds and macabre golems. Accompanied by his foster brother Olle and his friend Damion, and joined by a fire mage, a young paladin, and a beastmistress, Ghyll sets out on a journey that will take him across Rhidauna. But they encounter evil and mysterious sorcerers determined to kill them at almost every turn, and as they start to amass the artifacts one by one, questions about Ghyll’s past and identity start to emerge.

Rhidauna has all the essential elements of an epic fantasy and it delivers in its character development, action, and world building. The world of Rhidauna is detailed and nuanced with a rich history, variety of princedoms, political intrigue, lots of magic, and a myriad of customs. The cast of characters includes all the “expecteds” in a fantasy, and the banter and camaraderie among the party is one of the great features of the novel. The writing is understated and accomplished, leaving the reader to be carried by the story. There is a rare occasion when the prose is a bit choppy, intrusive or lapses into melodrama, but these are infrequent and do not take away from the novel, although the first chapter is unfortunately probably the most difficult to get through.

Ghyll is believable as a young baron who has been trained from birth to be a nobleman and a leader. He is also likable, and while suitably heroic and just, is also sufficiently vulnerable and flawed. Although the mystery of who Gyhll is is not difficult to solve, it does not take away from the enjoyment of the book. If anything, it makes it more familiar and comfortable while the reader is still left to wonder why and how he ended up where he is. While the idea behind Rhidauna may not be particularly original, the world building is, and it is a well-executed, solidly told tale that is well paced and pleasantly entertaining. The tension could have been ramped up in some scenes, but this is a minor issue and might have taken away from the nice, easy style of the novel.

For lovers of epic fantasy and sword and sorcery, Rhidauna is an enjoyable read with great world building and lots of adventure reminiscent of the Belgariad by David Eddings. Well-written and plotted, it delivers what readers of the genre would expect and keeps the reader turning the pages. For lovers of epic epic fantasy, Rhidauna might be a bit short, but overall a very good start to a series. Recommended.