Review of THE BLUE HOUR by Vicki Righettini 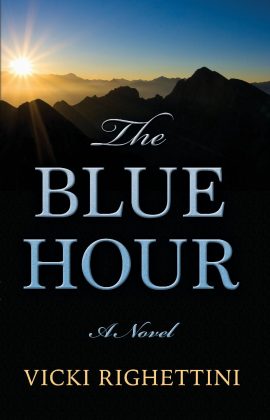 It’s 1861 in Springfield, Illinois, and 26 year-old Emily Wainwright is on the brink of settling into spinsterhood when she meets Samuel Todd. Enamored by his charisma and good looks, Emily is also drawn toward a shimmering possibility on the horizon . . . maybe it isn’t too late for her to have the husband and family she’s yearning for after all.

Emily’s dream shifts into high gear when Samuel proposes, but it doesn’t take long for her to discover the sharp edges beneath his smooth-talking exterior.  As the newlyweds follow Samuel’s plan to homestead in Oregon, Emily is increasingly distraught over her husband’s ability to be mean and controlling.

After Samuel dies, Emily knows it will be difficult to forge ahead alone, but she’s heartened by the idea of starting over. When she starts falling for farmhand Cole Walker, her second chance for a happy life expands into a second chance at sharing her life with someone . . . if she can allow herself to open up to love before it’s too late.

This novel is about second chances and the courage needed to take them.

There are times when the pace seems too slow, but it’s soon evident that these moments are reflecting the motion of the interior and exterior journeys underway. It also becomes clear that healing a wounded heart can be more terrifying than traveling into the geographic unknown.

The most compelling aspects of The Blue Hour are not the vivid, expansive descriptions of life on the vast (and seemingly never-ending) Oregon Trail or the well-drawn characters who dance (and often trudge) between hardship and hope. Instead, the brightest lights burst forth from nuanced moments tucked throughout the story.

Like Emily’s first few moments alone after Samuel’s funeral. Contemplating life beyond her miserable marriage, Emily’s thoughts and actions draw us into the cacophony of emotions at work, and the strength she derives from taking small steps into her next chapter. “She could do this. She could eat this meal, drink this tea. She could do this one, small thing. And perhaps if she did enough small things, she’d figure out what to do with the rest of her life.”

Read this book if you want to immerse yourself in the wilds of western America in the 1860s or get lost in the even denser wilderness of love and loss.

Maybe this recommendation needs to be simplified even further – read this book. It’s exhilarating to root for a character who is trying to navigate uncharted territory and make the greatest discovery of all.