Review of THE PASSING OF TULEE MAIN by Peter S. Kelley – 4.5 Stars 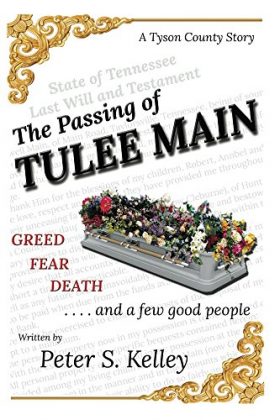 Liz Cleburne learns that Tulee Main, her ninety-one-year old mother, has suddenly died apparently of natural causes. When she was alive Tulee’s somewhat edgy and stubborn disposition didn’t always set well with family members, except for Liz who genuinely loved Tulee and cared for her whenever she was able. Odd things leading up to and after Tulee’s funeral occur, such as Liz’s husband Bart and his strange moments of feeling under the weather, as well as the unusual situations that accompany the reading of Tulee’s will. While much of the will highlights the partitioning of Tulee’s land to Liz and her sister Annbel, Liz and Bart are unaware that there are others, including family members, who have been madly scheming to take over a portion of Tulee Main’s land.

Bart grows suspicious to the odd situations surrounding Tulee’s death. One situation that seems to stand out is this fixation on Tulee’s field. One person Bart is wary of is Eb Morgan, who is always caught snooping around Tulee’s home. Bart collects random clues wishing he could get some direct answers. His search takes on an unexpected tone when Vickie, Eb’s girlfriend, seeks their assistance in locating Eb. What Vickie learns is equally unexpected when she hears of Eb’s mysterious death. Vickie is only the beginning of a flurry of evidence that Bart and Liz have to piece together to understand the truth behind Tulee’s death and her land.

Kelley relays a simply good and evil story in his debut. Kelley’s narrative presents a tale—as it says on the front book cover—that is laced with “greed, fear, death…and a few good people.” Keeping to constantly shifting character scenes, Kelley’s plot flows seamlessly from one chapter to the next. Although much of Kelley’s storyline is pretty predictable, there is a greater purpose to its design. As Kelley states, “I believe that one of our current failings is the failure to recognize good and evil in this world, much less to take a position on either. We don’t do that even when it’s standing right in front of us—on the TV, in Washington or on the nearby streets. I hope it’s obvious this tale does take a position—one that’s markedly different from what we often see—and that it may encourage you to do so more openly. I believe it’s what we all should do.”

While holding to a Christian undertone, The Passing of Tulee Main is one story that has the potential of capturing the interest of quite a large audience.


Read The Passing of Tulee Main