Review of THE RIGHT WRONG NUMBER by Jim Nesbitt 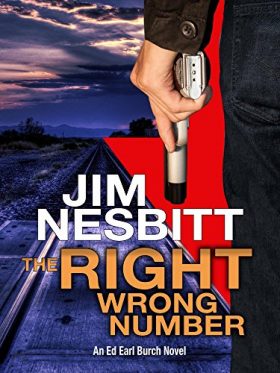 Savannah Crowe, a nightmare turned lover from five years earlier, makes a collect call to ex-homicide cop Ed Earl Burch. A Dallas PI working handoff assignments, Burch wonders what would possess this now-married woman to contact him. Savannah claims that she is a suspect in the murder of her financier husband, Jason Crowe, and she wants Burch to find—”that sorry puke husband” of hers or “the guys that fried him.” There’s more to the story that Burch isn’t privy to, such as a million plus missing from Jason’s offshore account.

Jason has been religiously ripping off his mobster clientele. His actions come back to bite him in the derriere when he learns that Savannah is the culprit to his depleted funds. As Savannah becomes a target, Jason oddly goes missing. Burch who takes on the case and shows up at Savannah’s supposed undisclosed location ends up gunning down an assailant. Apparently, someone wants her dead, but who? While it is clear that it is time for Savannah to go underground, Burch madly tries to put whatever puzzling clues he can gather together, especially since things just don’t seem to be adding up. While sleuthing for the truth, plenty of gore punctuated with erotic sex occurs before he gets a hot lead that takes him to the Houston Livestock Show and Rodeo. But any thoughts of finally putting this case to bed go by the wayside when Burch learns that what happened at the show is only a sign of more trouble ahead.

Nesbitt opens the second book of the Earl Burch series with a scene that provides a window not only to Burch’s dangerous line of work but also offers readers a small connection to the Crowe case. Like a well-oiled machine, Nesbitt’s story flows seamlessly from chapter to chapter, producing a continual stream of details to build his driving plot. Of course, front and center of Nesbitt’s narrative is the inimitable Ed Earl Burch who is unlike the well-recognized hard-boiled PI characters of yesteryear. Hammett’s Sam Spade, Chandler’s Philip Marlowe, and Spillane’s Mike Hammer come to mind.

Ed Earl Burch is nothing less than a crazed and snarky X-rated middle-aged PI whose vivid imagination and “foot-in-your-mouth-all-the-way-up-to-your-hips” comments create awkward and sidesplitting situations amid dark comedy, gory scenes, and heated sex. While The Right Wrong Number is a perfect stand-alone, Nesbitt fans know that if you want to get the full impact of Ed Earl Burch, start with The Last Second Chance.

The Right Wrong Number is filled with the latest and greatest of Nesbitt’s Quentin-Tarantino wit mixed with everything gory, despicable, irreverent, and plenty of sex. Indeed, a great combination of mystery and a plain laugh-out-loud read—guaranteed to be a favorite for noir enthusiasts.