Review of Werecat: The Trilogy by Andrew J. Peters 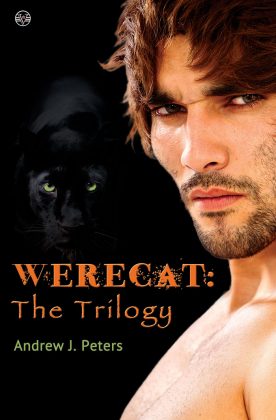 This is the collected novellas about Jackson, the Werecat, by Andrew J. Peters, all previously released works.

In the first segment, Werecat: The Rearing, Jacks literally staggers into the world of werecats when Benoit rescues him from a fall on a steep wooded hill. There are two tracks here, flashbacks to Jack’s origin story and then the current day events were the relationship between himself and his maker have begun to sour.

In the second, Werecat: The Glaring, Jacks has begun a new, nonsexual, relationship with Farzan, the man he rescued from his maker’s jealous wrath. Bella, a seemingly normal domestic cat from the first book, returns with a rather violent werecat of his own. This were-jaguar is  rather eager to avenge the death of Jack’s maker… or maybe just steal something Benoit left behind. Nobody is quite sure.

In the final book, Werecat: The Fugitive, Jacks has head off the Caribbean to search for the items the Glaring, a shadowy coalition of werecats bent on world domination that sent the were-jaguar to get would he could of Benoit’s seemingly meager belongings. Jacks falls in with Maarten, a wealthy werelion who likes the water and snuggle piles with the werekitty bois he’s collected over the years. Maarten keeps him safe, but distant from Farzen, Jack’s mortal love.

I especially liked Jacks’ faulty assumptions about how the condition is spread, but the mirror world of domesticated cats and their politics (if you can call it that) is the best surprise. It sneaks up on you as almost comic relief, but by book two, the reader begins to understand that the every domestic cat that enters the sphere of influence of a werecat is a potential helpful ally. Or deadly Judas.

There’s a nice bit of word painting in a lot of the scenes in each of the books. Jacks staggered in the world of werecats when Benoit rescued him from the woods and the author does a great job of portraying the werecougar’s lack of experience and ignorance with how things work in both the cat’s world and the “real world. Pretty realistic and fun, in turns, but with pages getting dark.

The downsides are small. Book 2 is incredibly short and I just wasn’t happy with where it ended in the story arc. Book 3 is a much more complex story than the previous and much more satisfying in depth and characterization than The Glaring, but it still doesn’t feel like the right place to end. I’d have preferred if The Sim Ru Prophecy (Werecat #4) had been included. Then Peters’ could have called this: Werecat: The Box Set.

For me, some really bad word choices/phrases threw me out of the book. The worst offender was Jacks “jettisoning” across the room once. By the third time he did, I was ready to attack the author. First of all, “jettison” is an action that you do to things: one simply does not jettison one’s self. Secondly, — despite the fact that the word JET star in the word Jettison — to jettison something is to discard something or to toss it away. It doesn’t imply that you’re launching anything at all, not even at jet-like speeds.

There were others, but this was the only one that happened repeatedly and always in the middle of a tense battle scene: the worst place to be thrown out of a book.

My favorite character is Farzan. He was the star of almost every scene he was in without making him godlike. The author kept him human and vulnerable with such a deft hand. I was reminded of Anita Blake’s supporting cast when Laurell K. Hamilton uses them at her best.  I will have to search out Book 4 to see what happens to him next.

According to the acknowledgement at the end of the book, when Andrew J. Peters started writing the books between these covers, the author had decided to “queer” the vampire and werewolf craze in the “delightfully narcissistic tradition of” those who had come before. Shortly after starting, however, he seemed unsatisfied with the neon pink paintbrush he’d been slapping across the canvass. He began researching the deeper history of feline mysticism and Native American two-spiritism in an effort to create a richer and more unique universe for his shifters to frolic and slash each other in.

I’m happy to say that he succeeds.