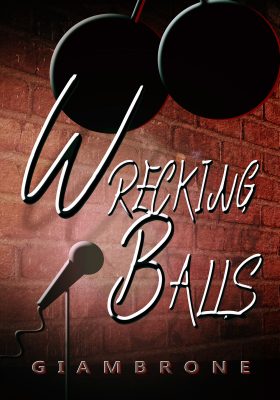 Charleston and his best friend Gary are handcuffed to their own hospital beds as a cop questions them.

Flashback to a short while ago, two 30-something year olds sit around in a cheap apartment while brainstorming a joke involving lady parts. This is Charleston and Gary’s reality. The two of them travel every night to any stage in any city that’ll give them a spotlight. They’re living a dream that was planted by spending hours watching a stolen VHS copy of Eddie Murphey’s RAW when they were kids.

A longtime friendship is threatened when Gary climbs up onstage and breaks a code amongst the comedian community: he stole Charleston’s joke. As result, a chain of events are set in motion in which Charleston exacts revenge on his old friend who appears nonchalant about the rule he’s broken.

Wrecking Balls holds nothing back as it affirms that the life of a comedian is all material; every heartache, every embarrassing detail, and raw wound becomes a topic with a punchline for the stage. Joe Giambrone has crafted a compelling read that’s better than being seated at a live show. Of course, the best comedians make sure their jokes have context, but this book is a deeper look behind the stories these characters told onstage.

This “tale of friendship and its discontents” (as the author puts it) may not be for everyone. Fans of comedy, and those that enjoy stories of how relationships can be so strong and so fragile at the same time will enjoy it. At times it was confusing as to which characters were talking or doing the action, but this book has great qualities in the way of plot development and characterization that really hit it out of the park.