Review of You Are My Song by Susan Moore Jordan 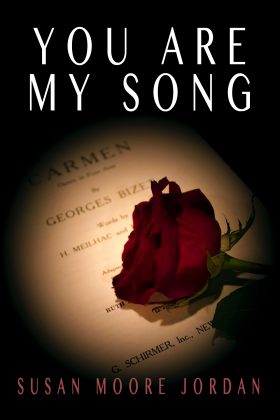 Jamie Logan’s love for singing was set in place at a young age. By high school Jamie gets involved in theater and his lilting tenor voice wins him the lead role in Rodgers and Hammerstein’s Carousel. Although he’s attracted to the lead lady in the musical, Jamie is too enamored to Sarah, his longtime sweetheart—so much so that Jamie dreams of the day when he will be a dad. A few years pass and Jamie and Sarah finally wed. But the marriage is not a happy one since Sarah forbids Jamie to pursue his other dream of singing. Dissension brews eventually leading to divorce. Now with his dreams dashed, Jamie feels like a failure, especially when Sarah snidely comments that maybe he’ll “find a job as a professional rainbow chaser.”

Getting back on his feet, Jamie decides to contact Ed Davidson, his high school vocal teacher who inspires him to train for entrance into the University’s opera program. Passing with flying colors, Jamie slowly begins to build his career as an opera singer. Yet as highly talented as he is, Jamie has no idea the trials he will have to face on his musical journey. Jamie periodically finds himself plagued with nervousness prior to performances and low self-esteem as competition auditions become more taxing. It doesn’t help that a family crisis gets added to the mix. Amid all his problems, Jamie knows that the only one who can help him achieve the highest career goal is the woman he loves. But whether or not Jamie can overcome his worse enemy in the process will be his ultimate challenge.

In the final novel of The Carousel Trilogy, Jordan gathers the featured characters (Melanie Stewart, Krissy Porter, and Jamie Logan) from her series together in one glorious romance tale. Based on her “experiences as a voice teacher and stage director” and “inspired by real people she has encountered,” Jordan’s 1960’s plot shines a light on the complexities of professionals in the opera realm. While men and women’s roles were defined differently in general as well as in the musical arena, so too were issues of race and gender—all thought provoking concepts for readers to ruminate on to compare then and now. As she weaves in these troubling aspects in the midst of Jamie’s intriguing life, Jordan includes a delightful array of all things opera.

You Are My Song creates a nice closure to a great trilogy! There is no doubt that the largest draw of readers will come from those who are musically inclined—whether instrumentalists or listeners. Yet Jordan incorporates so much more than the opera scene to grab the attention of anyone looking for a captivating read.


Read You Are My Song