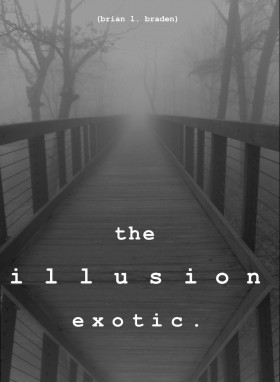 A post with the ID $staff does not exist.

Brian L. Braden presents six tales of souls turning life’s corners. From the Old West, to the edge of space, six people must learn to abandon the illusions that feed their fears, and trust in love, friendship, and courage.

The end of the world is bad enough, but its worse when you’re a kid. For little Anant, hope comes in the most unlikely of forms, the voice of Captain James T. Kirk. However, in Spaceship Name, hope does not come without a price.

In Green, a young pilot’s courage and fledgling skills are tested to the limit in the pitch black skies above a treacherous battlefield. In one terrifying moment, she will either lead her crew to triumph, or perish.

A former Civil War soldier embarks on a quest on behalf of his former commander. He expects to find outlaws and gunslingers in the high deserts of New Mexico, but instead stumbles upon death incarnate in The Cave.

After a long day, second grade teacher Margaret Nichols only wants to go home, run a warm bath, and open her wrists. Fate has other plans, however, in the form of a bloodstained Bible and The Boy in the Hole.

On a Saturday night, high school nerd Mike faces a tough choice: pursue a chance for romance with a popular cheerleader, or hang with Todd, his best friend and notorious loser. What he doesn’t know is his decision will mean life and death, and forever go down in history as the Incident at the West Flatte Dairy Queen.

Carson’s Love takes the reader into the lives of the Campbells, a family falling apart. Megan and Rob have become so lost in their own lives, they’re about to lose each other. Then, while giving their baby a bath, Rob Campbell makes a startling discovery, and their world suddenly turns upside down.

A word from the author:

“To the readers, authors and independent literary industry professionals who make up the Underground Book Reviews community, thank you for making UBR one of the fastest growing indie lit websites. I deeply appreciate you giving me the opportunity to share the news about my latest book, The Illusion Exotic.

“Like many writers, short stories give me a necessary break from the deeply involved and intricate plots in my novels. Also like many writers, as I’m working on one project other projects refuse to be ignored. They interrupt, nag and generally pester until I show them some attention. So, in the quiet moments when the current project has revealed all it cares to for the day, I’ll open a short fiction project on my computer and let the magic happen.

“Where moments ago, I only encountered frustration, now the words lay down in smooth layers one upon the other. Where before I couldn’t find the right word, or couldn’t make the dialogue flow naturally, I’ll find words, sentences and paragraphs dropping from my fingers and falling into place, interlocking with ease. Where I would have otherwise abandoned a night of writing with little to show, now I push away from the desk satisfied.

“These six short stories mean as much to me as my full length books. They were all penned while I was writing my first two novels, BLACK SEA GODS and TEARS OF THE DEAD. For those familiar with my novels, you’ll discover these stories are a significant departure from my usual fare. For those new to my writing, it is my hope they will provide an enjoyable gateway to my greater body of work.

“As part of the celebration, the illusion exotic is available until 22 April for only 99 cents. After that, it will revert to its regular price. I am also offering discounts on my epic fantasy series The Chronicles of Fu Xi all this week at a significant discount.

Once again, thank you for sharing this journey with me and Underground Book Reviews."

More about on UBR