4 stars: Review of THE FORGOTTEN GEMSTONE by Kit Daven 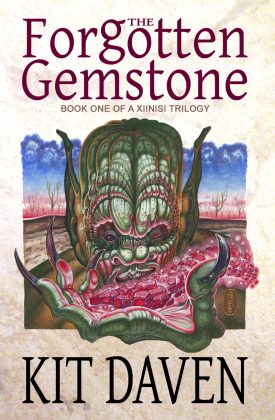 The novel starts with an emotional upset goddess escaping the reality of her plane to a world she’d created to comfort her. The world, however, has been slightly neglected and has changed into an almost unrecognizably arid landscape. These changes aren’t anywhere near what a few thousand years of neglect would account for. The cultures have changed. Her priests and worshipers are all but forgotten. The fantastic flower-beast that was supposed to be nigh-immortal is dead and petrified as stone, as if it has been dead a million years. None of this makes sense to her.

The very nature of the world is so fundamentally changed that a great deal of her power is out of reach. Her exit from the world is cut off. She begins her investigation into what happened assured that she is still safe with the power she possesses. Once she corrects whatever has gone wrong, she believes that she can return to her home realm without issue.

Instead, Ule is surprised to discover that demons still walk her world. Unprepared for this, the one time goddess is captured and transformed into a tool to be used by anyone who possesses it/her. For long generations, she is studied and used, often without out her conscious thought.

Eventually, she escapes her servitude and has to pull herself together without the memory of what she once was. Or could be.

There’s quite a bit of world-building here and the first few pages suffer under the weight of it. Interestingly enough, her conflicted emotional state when she first ran away to Elish might have been the harder part for me to unravel. I’m not sure if its a blessing or curse that we don’t see the Xiinisi (world-builders) homeland and society for jumping into the ruins of her comforting sanctuary creation. The saving grace in these first 100 pages were the characters she populated the world with. I found her interactions with the mere mortals of her realm refreshing, realistic, and often amusing.

Once the goddess was transformed, I began to like her. Long before the halfway mark, I loved her and cheered for her. I wasn’t sure if I wanted her to regain her godhood or simply accept her humanity. As a TF fan, I enjoyed all the transformations. The demon Istok’s one trick pony transformations became boring quickly, but it proved satisfying in the end.

Now that the characters and the worlds of Ule are more fully fleshed out, I’m looking forward to the sequel.