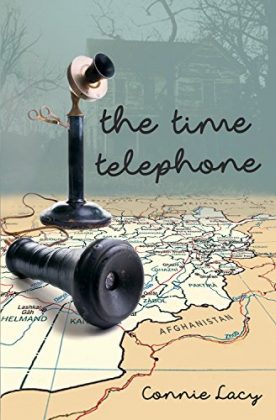 The Time Telephone by Connie Lacy is a charming coming of age story about loss, abandonment and acceptance. Megan McConnell, grieving over the death of her journalist mother, stumbles across a telephone that allows her to call the past in the farmhouse where her mother grew up. Determined to prevent her mother from dying in a bomb attack in Afghanistan, Megan tries to contact her mother multiple times in the past to convince her to stay away from the location of the blast.

Megan’s relationship with her mother was complex and the reader comes to realize that her mother mostly chose a life of adventure and career over motherhood, leaving Megan to be capably raised by her grandmother, Kate. Megan’s mother showed up regularly with gifts, but was little involved in her daughter’s life. Despite this, Megan is determined to find a way to bring her mother back, even at risk to her own life.

The Time Telephone is very well written. The prose is precise and heartfelt, with plenty of character development. All of the characters are unique and fresh. Megan’s grandmother is a superior court judge. Megan’s boyfriend, Kieran, is half Irish, half Indian and he’s younger than her. The mean girl turns out to be nice. There is a simplicity to the story that is compelling, and yet Megan’s struggle to come to terms with her mother’s death, and her feelings of abandonment are very real and are not downplayed in the text.

Although it involves a time telephone, the overall story is more magic realism than science fiction, and sets up some nice opportunities for the reader to see Megan’s mother at different stages of her life, thereby allowing us to understand her relationship with her daughter. Lacy does not tie up the story with a neat bow however, instead allowing for a slightly grittier but realer ending, and she is unflinching in her portrayal of Jody, Megan’s mother.

The intended audience for the story is a bit unclear. Megan is in grade eleven at school, but seems both older in some ways because she can drive and has a car, and younger in others with respect to her interactions with her new friends. Despite Megan’s age, The Time Telephone seems like it might be targeted at a younger audience given its length and subject matter.

The Time Telephone was a short and yet insightful read about love and loss that explores how one might go about changing the past given the opportunity and the need to come to terms with difficult truths about the people we love. It would be suitable for adults and young teens.

If you had a writing motto what would it be?
Stick to themes I care about. And write with passion.

Where do you draw your inspiration?
I'm inspired by challenges we face - whether it's climate change, being abandoned by a parent, or finding meaning in life - and how we deal with those challenges. I strive to create characters who find the strength to overcome obstacles or complications in their lives. I draw inspiration from real people who refuse to give up, including activists who spend their lives trying to drag us, kicking and screaming, toward a more humane world.

What is one interesting fact about you?
I spent years as a journalist, bending over backwards not to inject my opinion into the news. Now, as a novelist, I'm enjoying the freedom to let my feelings flow through my characters.

Have you learned anything from the self publishing process and would you do anything differently next time?
I would establish my own publishing imprint from the get-go and buy my own ISBN numbers. Instead of just publishing through Createspace and KDP, I would be in the position to publish elsewhere as well, hopefully making it easier to get my books into book stores. I'm going through that process now after publishing five books exclusively through CS and KDP.

What has been your most successful marketing strategy?
I've had some success running KDP ads recently. While sales of my ebooks have not been overwhelming, I've had better results than running giveaways in generating higher sales rankings and a few reviews. My suspicion is that when I do giveaways, the vast majority of those people downloading my books never read them. I think people who pay for a book are more likely to read it. But I keep my prices low, hoping to entice readers to a new author. The caveat, of course, is that I have to continue running ads to get any traction, and that costs money.

What is the best kept secret you have found in regard to indie publishing?
I've discovered there's a camaraderie among indie authors I didn't expect when I started out. I, myself, take satisfaction in helping other authors promote their books, and other authors have been generous in helping me promote mine.