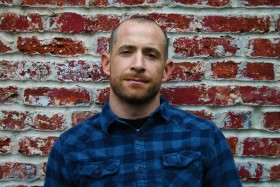 More about Interview with David Khalaf on UBR

YVONNE: When did your interest in the 1930s and '40s develop, and how did you transport yourself from the 21st century to the Golden Age of Hollywood as you wrote THE SIXTEEN BURDENS— any routines, rituals . . . costumes?

DAVID: Having lived in Los Angeles for more than 15 years, I've always noticed little bits of history popping out of the nooks and crannies of this ever-changing city. For example, there's a plaque on a pubic staircase near my apartment that commemorates a famous Laurel and Hardy sketch where the men had to drag a piano up those stairs. I love finding these gems; it's like being a film archaeologist.

To steep my story in the era of 1930s Hollywood, I watched many old black-and-white films, read a lot of noir fiction, and often referenced the Works Progress Administration's 1939 city guide of Los Angeles. I did buy a fedora, too, but it didn't seem to help my writing any.

YVONNE: On Amazon, you write that the character work you did for this novel was "too good not to share,” so you wrote HOUDINI'S LAST TRICK for readers to dig into before or after they read THE SIXTEEN BURDENS. Tell us more about that evolution — really love the idea of an unexpected, compelling story emerging.

DAVID: I love a good plot, but I often struggle with character. So after a flat first draft of THE SIXTEEN BURDENS, I decided I needed to know more about the protagonist, Gray Studebaker—not just his own childhood, but the whole history of how he came to be where he was and why. I love vintage magic and magicians, and I always had a sense of how Harry Houdini was involved in Gray's backstory; but it wasn't until I sat down and actually wrote it out that I saw how compelling Houdini's own story was. Houdini's conflict sets the stage for THE SIXTEEN BURDENS, not only from a plot perspective, but thematically in the choices he makes out of love for others. Although it took me nearly two years to write THE SIXTEEN BURDENS, HOUDINI'S LAST TRICK tumbled out of me in a little over a month.

YVONNE: When did you decide to follow the self-publishing route, and what has that experience been like for you?

DAVID: Although I've never been opposed to the traditional publishing route, I've always had my eye on self-publishing as the path I wanted to take. Hugh Howey, author of the Wool series, really blazed the trail in self-publishing and proved that it could be both lucrative and rewarding. It's a riskier route for sure, and the demands upon self-published authors are so much greater because they have to take on all aspects of the publishing process themselves. I definitely feel that strain: When I'm writing I feel like I should be marketing, and when I'm marketing I feel like I should be writing. But I love the freedom it affords, and there is great potential for reward as well (or so I've heard!).

YVONNE: If you could spend 24 hours with any author (dead or alive), which author would you choose, and what would your itinerary include? (Expense account in full-effect, of course!)

DAVID: I have many writing heroes, but Raymond Chandler is the author I'd most want to meet, for so many reasons. He's the king of noir fiction, and THE BIG SLEEP is one of the greatest pieces of Americana ever produced. I admire him because he didn't start writing until the age of 44, and he persisted even though his fiction was widely panned by his contemporaries because he wrote for pulp magazines like BLACK MASK. But read just a few paragraphs of his vivid, highly stylized writing, and you can't help but picture Humphrey Bogart verbally sparring with Lauren Bacall.

Naturally, I'd want to go have gin gimlets with Chandler at Musso and Frank Grill, one of Hollywood's oldest restaurants. We'd cruise the boulevard in an old Packard convertible and visit some dance halls. It would be a splendid evening until, unavoidably, someone would get murdered, and we’d be called upon to solve the crime.

YVONNE:  What are you writing now? And, what are you reading now? (Can't resist asking writers what they’re reading . . . )

DAVID: Currently, I'm working on a novella about Mexican revolutionary Pancho Villa; it's a side story that is part of THE SIXTEEN BURDEN series and takes place simultaneously with the events in HOUDINI'S LAST TRICK. It will give interesting background to Book 2 of the series, which will come out in November or December of this year.

I'm always reading a few books at once, depending on where I sit in my apartment. Right now it's THE NAME OF THE WIND by Patrick Rothfuss, THE MECHANICAL by Ian Tregillis, and THE AVIARY by Kathleen O'Dell.