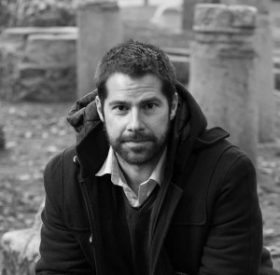 More about Interview with Dominic Carrillo on UBR

CANDI: Tell us about what inspired you to write The Improbable Rise of Paco Jones.

DOMINIC: I was observing my 8th grade students (I teach English) and noticed this one boy who was kind of dorky and on the outside of the popular clique of kids--both culturally and physically. He was gazing at one of the pretty, popular girls with such an innocent, longing, hopeless stare. The girl he was looking at was already in a “serious” relationship with the big 8th grade stud of the class. It’s a very familiar scenario, right. It reminded me of when I was in 8th grade and how-- at that age-- everything is so immediate, important, and dramatic. Every statement is hyperbolic-- you want to marry so-and-so, or the humiliation at lunch recess was the end of the world-- yet young teens pumped up on all those hormones really believe it. So I imagined my fictional 8th grade self in the role of the dorky outcast with a desperate crush and took it from there. Once I started writing it I realized that there would be a bi-racial identity theme along with the romance. What inspired me through the re-writes and edits was the idea that this story could reach teen readers--at the very least, my students-- who are currently struggling with identity, culture, class and relationship issues.

CANDI: Paco does not refer to his feelings for Naomi as a crush—he calls it love. Why attempt to explore the concept of real love through an eighth grade boy?

DOMINIC: Paco confidently asserts that he was in love, but was he? I’m not sure. I think teens--and some adults-- use the word “love” inappropriately, when it may be something else. The narrator is looking back at his 8th grade self so this “really in love” idea brings up the issue of our flawed and nostalgia-filled memories. On the other hand, maybe it’s our first experiences with “love” that are the truest and purest-- the least corrupted, the least jaded. So I thought of it more as a question: Was Paco really in love at that young age? The big thing for Paco’s character is the growth he has in respect to objectifying women. It was something that developed as I edited and got feedback from women readers. I almost missed the opportunity, but I hope this message is clear: It’s not Naomi’s beauty that makes her so great, but the connection that her and Paco develop throughout. In a culture obsessed by immediate gratification, booty-filled videos and ultra-materialism, I thought it was important to include the element of “real love” and romanticism.

CANDI: Paco’s classmates tell racist jokes as if they are no big deal, yet they clearly have an affect on Paco. This juxtaposition creates a powerful theme in the novel. What impact has this had on your young readers?

DOMINIC: Well, I don’t know the actual impact of the racism theme, but I can tell you what I intended. I wanted the issue of racism to be present but subtle. So many YA novels that focus on racism make it all about race. I didn’t want to do that because it’s more complicated and connected to other factors. I grew up in an America that claimed-- on the surface-- that Martin Luther King had solved the issue of racism and we lived in the land of the free. But as soon as you start paying attention, you see racism has always been an issue and continues to rear it’s ugly head-- even more so lately. Some thought that the election of a black president, Obama, signaled that we lived in post-racial society, but it’s revealed the opposite--America has a unique racist undercurrent that must be identified and treated like the cancer that it is. And it’s intertwined with class, gender and culture. Paco is bothered by racist comments, but it doesn’t dominate his life (Naomi does!). I notice this with a lot of junior high kids. They don’t want to be the victim, so they ignore it, make light of it, but ultimately internalize it and don’t realize this until later in life. The discourse about race in the US is often viewed in simplistic and divisive terms of black and white; it’s either overt or non-existent. I wanted Paco’s story to be in the middle--the racial/cultural grey area that is more complicated but not fully explored because I didn’t want to spoonfeed the reader my ideas. Hopefully it will spark meaningful discussions amongst teens, teachers, and parents.

CANDI: Trent and Paco have very different experiences in school, but each character is concerned with the same thing—social status. What insight might your readers take away from each of their quests to be popular?

DOMINIC: Popularity, in a way, is handed to Trent. He didn’t earn it, he’s not aware of his inherited social luck (or his wealth), and he doesn’t really deserve it. Paco is the opposite: He’s aware that he’s at the bottom of the social heap and has to fight to rise in the ranks. Only toward the end does Paco realize that it’s stupid to buy into the social hierarchy and sees-- through Trent’s demise-- how ephemeral and baseless it is, especially in junior high. But why do Trent and Paco care about status? -They want to get the girl! Vying for social status as a teen seems like a very normal, natural thing to do, yet at some point we stop caring about who is popular and where we rank, right? The message I hope to get across to junior high students--and some adults-- is that they shouldn’t mistake being an asshole for being cool. Be kind, for chrissakes! I wanted Paco to be the example of the nice, quirky guy that can be cool too.

CANDI: Tell us about your experience publishing The Improbable Rise of Paco Jones.

DOMINIC: It was less painful than my first novel. I’ve come to appreciate the editing process and trust that it will make my writing much better. I asked trusted friends and colleagues to read and give me specific feedback, which always helps. I found a new editor (Jennifer Redmond-Silva) who is great--professional, insightful, and easy to work with. I revised and edited until she said it was done. I need someone to tell me when it’s done because after six months to a year of editing, I am mentally done with it-- and already thinking about my next project. I’d used Createspace Publishing before and liked publishing through them, so I planned to go indie if the handful of agents I emailed didn’t want it within a set time frame. A few agents were interested, but not interested enough. So I self-published with a plan of soliciting more reviews and self-promoting. Luckily I got good reviews from Kirkus and School Library Journal--which helped open some doors. A few teachers and librarians have taken a liking to Paco Jones, so hopefully it gets into the hands of more and more readers.

DOMINIC: Another YA novel. It doesn’t have a real title yet because I keep changing it, but right now it’s either The Unusual Suspects or From Belgrade to Berlin. It’s about an 8th grade girl named Nia who has run a away from home (in Bulgaria). While on the train to Berlin, she nearly becomes a rape victim-- saved by an elderly American man named Kurt who is on a solo escapist journey of his own. Shortly after their paths cross, they become bound by the fact that they’re now criminal suspects on the run in eastern Europe. Though Kurt and Nia’s respective trips take wild deviations, it ends up profoundly changing both of them… So that’s it. As I continue to write and publish independently, I’m becoming more comfortable with the whole process. I have no illusions about becoming a bestselling author. I don’t write to a market or trends. I write stories that I want to write, that I enjoy telling, and that I hope my readers will appreciate and find meaningful or thought-provoking. If people buy my books, then great! Either way, I keep writing because I truly enjoy it.


More about Interview with Dominic Carrillo