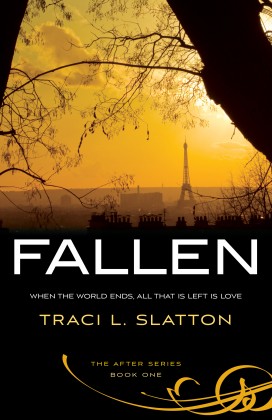 We meet Emma 10 months after devastating mists emerged from the ground, “white miasmas, smelling of both sulfur and lilacs, that floated and randomly scorched anything in their paths.” The mists became increasingly lethal, killing anything without chlorophyll “slowly, agonizingly,” until the day “the entire earth rang with screams,”and life is into Before and After.

As Emma roams through a decimated France, she provides sustenance and protection for her band of 8 “daughters” – one biological and the others rescued to become siblings in survival. She achingly wonders if her husband and other daughter are still alive, and if she’ll ever make it to Canada to find out.

Emma quickly learns about the mists, their attraction to metals and aversion to percussive sound. She also becomes aware of the gifts awakened in the After – her own miraculous healing powers, her daughter Mindy catching glimpses of the past, and Newt seeing the future.

Compassion gives Emma the courage to mercifully shoot those being consumed by the mists, and in the chilling scene where she describes one a barbarian she’s hiding from, it’s evident just how much courage is required in everyday life. “I saw a package hanging by his side. It was a chunk of smoked meat wrapped in waxed paper. . . . . . that hunk of meat looked like a flayed figure masquette I’d done in a sculpture class – specifically, a human thigh, from the head of a femur to just above the knee cap.”

When a man named Arthur and his posse ride in and save Mandy from the mists, Emma negotiates her group’s way into the safety of this well-stocked, heavily armed camp by offering herself to him. It is soon evident that the “No expectations, no demands, no commitment” terms of their deal are just words. Their physical attraction is primal and passionate, yet Emma and Arthur also share an intellectual connection and sense of playfulness. And, there is something else between them. Each one holds tightly to a secret that could shatter their connection forever.

Emma struggles with letting go of her precious, perhaps non-existent past life and forging forward to create a new one with Arthur. She faces an ongoing barrage of questions — Is Xavier trustworthy or a traitor? What can Laurette teach her about embracing her healing powers and paying closer attention to what others reveal? How will kind-hearted, young Mikhail and his bitter father Alexei affect her destiny? And, of sudden, unexpected importance. What is Arthur hiding?

FALLEN is the kind of novel you tumble into heart first, immediately lost in a thicket of emotion where hope-filled light shines through intertwining thorny points of fear and devastation. The author creates a cadence where revelation is ripe and ready, as if she knows exactly how much we need to see and understand in order to recognize Emma’s struggles as our own.

Go ahead, allow yourself to fall into FALLEN. While the ending is one of those “things that make you go hmm,” you can exhale in knowing there are three more books in the After series. Phew.