Review of Olga by Ted Kelsey 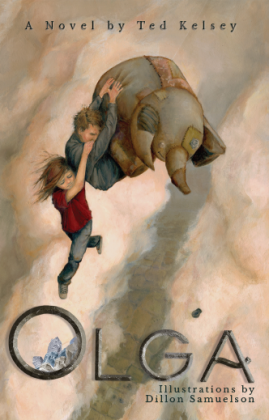 Who would’ve thought a stuffed elephant could lead to so much adventure…and trouble? In his debut novel, Olga, Ted Kelsey takes readers on a captivating journey of friendship, fear, trust, and imagination.

After spying the bouncing animal from afar during the day, middle schoolers Jack and Sally decide to investigate it that night, only to get trapped by its magnetic force and pulled up into a world in the clouds. Caught in this fantasy world with no seeming escape, the two children meet talking moths with kitten faces, a cloud giant princess, and a slew of other fantastical creatures.

Olga, the princess who had been watching Jack and the other humans on Earth, is unhappy and in search of a hero to free her from an arranged marriage. All the while, her human-eating, evil cloud giant father plots with his brothers to go to earth and destroy it. Not knowing who to trust, or how long they’re going to survive, Jack and Sally must learn to navigate the unknown, magical cloud kingdom as they try to escape and return home to their families.

An elegantly written novel, Olga may be geared toward a younger audience but will captivate older readers as well. Kelsey’s dark but humorous writing strikes a balance between entertaining and thoughtful as his characters work through tough situations externally in the cloud kingdom and internally as deeper emotions start to surface. Kelsey layers each chapter with details that bring the pages to life as the plot compels the readers to keep going.

A fun touch is the illustrations by Dillon Samuelson throughout the novel that help bring the story to life, though these were also the one disappointing aspect of the book (though a very small one!). The beautiful, colorful cover illustration sets up an expectation that the internal illustrations will be similar, but the artwork inside the covers are drawings without color. Though still beautiful in their own right, artwork rendered in full color could take the drawing to the next level and bring Kelsey’s world even more to life.

Olga will enchant readers young and old. At times reminiscent of Lewis Carroll’s Alice in Wonderland and at others of Philip Pullman’s The Golden Compass, fans of fantasy and adventure will find both excitement and comfort in the novel’s pages.

For readers who liked these books and authors: Alice in Wonderland, The Golden Compass