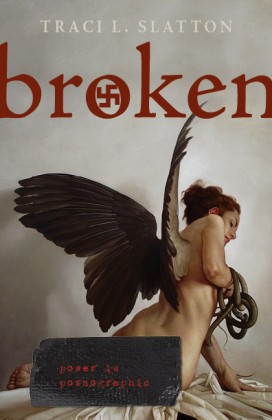 Broken opens with the narrator having a violent war-like dream. Waking from the dream, she speaks to the reader in metaphysical terms, speaking of “grace” and “light,” dropping clues of where in the physical world the reader might find her: “stormtroopers,” “tanks,” and “Europe.” It is a disconcerting start to a novel.
Eventually, she tells us who and where she is: It is Paris, 1939. She, Alia, used to be an angel, but because of some great personal tragedy, she lost her faith and left heaven to live on Earth in a human form instead. She could have picked any time in human history, but she picked one of the worst. Soon, we learn, she picked it on purpose.
The book covers the years just before the German invasion of France, then the years of the Nazi occupation and the Resistance. It engages with the very worst crimes of the Vichy government. It also provides a cast of characters straight from history: if you majored in French or literature of the modern period, you’ll recognize Sartre, de Beauvoir, Camus, Malraux, and more. Even Edith Piaf makes an appearance. The author’s adherence to historical accuracy is impressive. Later, as the Vichy government collaborates with the Nazis, the author’s description of Paris under occupation is both accurate and terrifying.
Throughout it all, the author manages some truly gorgeous turns of phrase. In explaining why she can speak any language with perfect precision and accent, Alia refers in this fashion to her former ethereal status: “I am exempt from Babel.”
Although the history provided in the book is fascinating, at times the plot and structure seemed to get buried beneath it, as did the main character’s motivations. Although readers will likely be drawn to Alia (she is magnetic, no doubt), it is unclear why she would turn her back on Heaven and her angelic self only to then act selflessly (mostly) on Earth. Early on, there is mention of a motivating event—a loss—but then that loss isn’t brought up again until the very, very end of the book. It was disconcerting that the very loss that drove her from heaven was not more of the story.

The book is beautifully written. The history is magnificent, and if you want to learn about occupied Paris from the perspective of persecuted Jewish families and Resistance fighters, this book is a fun way to do so.