Review of Germination by Jamie Thornton 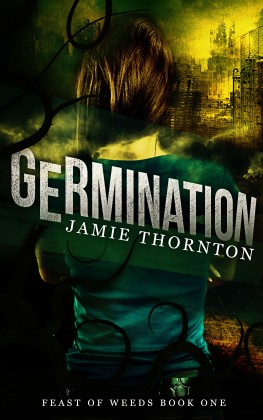 There’s always a ravenous appetite for undead tales, but zombies are notoriously difficult to keep fresh. In Germination, Jamie Thornton lands us at a familiar ground zero through a new pair of eyes. Our protagonist, Mary, is a tough and cynical runaway, with no loyalties but to her friends, and a lifetime of street survival her only weapon. But is she tough enough to save her friends from the outbreak of a mysterious and horrifying new disease?

Straight away this is a great premise for YA readers. Having our young heroes live outside the system gives them a kind of realistic vulnerability— with no adults or authority figure to lead them, the teens are free to act on their own agency.  There are no barriers to dropping the protagonist straight into the action.

As the story is primarily told from Mary’s viewpoint, the reader is afforded the opportunity to learn about the harrowing, sometimes disturbing, realities of her runaway lifestyle. Author Jamie Thornton pulls no punches in this regard, and though the story is YA (a broad category of expectations at the best of times) she never patronises or sugar-coats.

The sympathetic attention to Mary’s abusive background builds a solid, three-dimensional heroine, one who’s motives you can understand and who’s strengths are emotional, rather than physical. The result is a gritty teen drama that runs headlong into well-trodden, but still enticing, zombie territory.

Germination is a relatively short tale, meant as a primer for a larger series, and in this respect it is successful. However, the story also satisfies as a self-contained tale, and will serve well those of you looking for a quick read.

If strong female leads are what you’re after, the heroine, Mary, is fiercely independent, and a self-styled protector of her fellow street kids. After being exposed to infection she is horrified to discover that her identity, and her values, are slowly succumbing to a burgeoning and unreasoning aggression. This development is much of what is interesting and refreshing about this zombie tale– it is not a bunch of kids fighting off the undead with improvised weapons, as you might expect, but rather one girl’s struggle to retain her humanity.

As a stepping stone into the post-apocalyptic world of The Feast of Weeds series, Germination certainly plucks at your curiosity, and as a stand alone tale it satisfies and engages.