Review of SuperGuy by Kurt Clopton 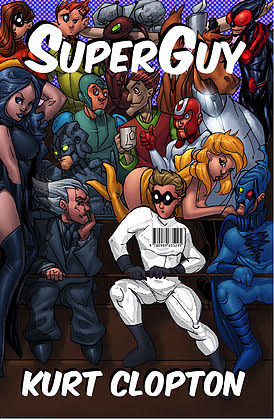 An elections minded Mayor and a less than impressed Lt. Mayor begin a small chain of actions that ends in a little bureaucratic bungling of some federally allotted funds and the superhero serum that came with it. Luckily, most modern superhero formulas are designed to make a hero out of anyone.

Enter an anyone by the name of Oliver, an average looking guy with an above average receding hairline, who graduated a bit too late and is way too old to be an intern. But that’s the job he landed. He’s trying to stay positive, but the best he can do is agree with his friend Roger that he’s making good money… if this were 1967. And Retro is cool, right?

They’re nerds, so they aren’t quite sure what’s cool.

Oliver ends up accepting the special folder that containers a finger trap drug delivery system for the superhero serum. It’s not the greatest origin story; but that’s how it is there days. Superheroes are pretty common and apparently, they all got a folder just like this one with contracts, a premade costume, and a generous health insurance policy (which is really cheap as invulnerability is free). Of course, Oliver doesn’t know what he signed up for.

As Oliver slowly begins to develop unsuspected powers, he’s dodging calls from HR because there’s already too many folders of other people’s work on his desk. His friend Roger finally steers him to his contractually obligated superhero destiny and Oliver dons the generically inspired outfit of SuperGuy.

All this is told in flashback as Superguy dangles over a generic vat of mutagenic acid waiting for the latest death trap to finish its Rube Goldberg convulsions and end his spandex clad life.

Here’s the great thing about SuperGuy… the premise smells like KickAss and the Greatest American Hero combined, but it’s neither. It  comes out as something better.

The slapstick and violence are actually tastefully minimized. The superhero cliches are handled well with perfectly selected, coordinated lampshades. I can’t stress how well the internal logic of the superhero and government relationships are handled, but then all the relationships are handled super well. Every human interaction is funny but without cost to the internal logic of this universe’s rules. You can believe in everyone in this story.

It’s rare for me to find a novel where the humor is handled so deftly and so consistently. It’s a smooth ride of smirks and chuckles and if there’s a flaw in the story, it might be that there are no big superbelly laugh payoffs. But, it’s not really that type of funny.

I like the romance in the story and I like that it’s soft and not a heavy plot point. I like that the girl he is seeing is a better and stronger superhero than he is. I like that he respects her and that he goes to her for help and (most especially) I like that he does it without whining.

I like that all the women in this book are strong; even if that strength might be getting other people to do their work for them. This is important, because this is a part of the present bureaucratic process; it isn’t women being bitchy. It’s just how offices often work. One woman deftly handles realigning responsibilities with  legit advice and ego buffing and we get to see her internal logic. Another woman is treated as an unreachable  goddess, so she selectively uses that to get men to do her bidding (said bidding is restricted to moving plants and office furniture), but we do not get to see her internal thinking. Beside Roger, there are only two efficient productive office staffers, and they are women… one works for the Mayor (Lily) and one reluctantly works for SuperGuy (Emma). They get their share of humor, too, and none of it at the expense of their personhood.

But mostly, I like Gray Matter, the villain, even if he feels, well gray… he’s almost a generic villain, which might be expected in a foil to a generic hero whose symbol is a bar-code and whose most outstanding feature is a randomly too noticeable crotch. I’m hoping that the next villian is much more colorful and outrageous and breaks all the rules that the author expertly set up.

Will there be a sequel? I assume so. It’s one of the rules.

There is always another issue coming out. I look forward to it.