Review of The Sixteen Burdens by David Khalaf 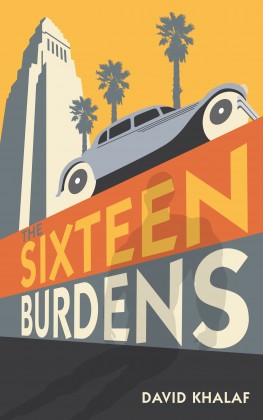 “What we call failure is not the falling down but the staying down.”  – Mary Pickford

When we meet Gray Studebaker selling movie star maps in 1939 Los Angeles, he is most definitely down, and it seems almost inconceivable that this 15 year-old isn’t destined to stay there. Almost. Gray may be described as “the Southern California sky, vast and empty” and someone who “stuffed every feeling he had into a small box in his mind, then locked it up and covered it with a blanket of numbness,” but grit and curiosity make him a magnet for the very things he needs to stay afloat.

Gray discovers something not called out on any of the maps he hocks for his cruel caretaker just as a slew of celebrities like Charlie Chaplin and Mary Pickford are kidnapped by a star stalker. Each missing movie star has been keeping superpowers under wraps for a long time – the debut of mankind sort of long time – and the stakes couldn’t be higher when it comes to unraveling their mysterious disappearances. The world is a breath away from World War II, and apparently Adolf Hitler isn’t the only tyrant building an army with diabolical intent.

As Gray attempts to solve the mystery and stop Hollywood’s seemingly indestructible maniac, he grapples with learning to trust other people and himself. He’s also forced to forge into the unknown, unsure if his own secret will be the key to deliverance . . . or doomsday.

Maybe you decide to dig into THE SIXTEEN BURDENS  because its (awesome) cover catches your eye. Or it might be the awards and slew of 5-star reviews that lure you in.  Either way, you’ll only need to read a few paragraphs to know your instinct was spot on. David Khalaf’s debut novel and the first book in THE BURDENS TRILOGY is an eclectic literary mashup — mystery mixed into urban fantasy with a backbeat of Hollywood’s Golden Age. While connecting the dots would be a tall order for a less talented raconteur, Khalaf delivers an engaging adventure grounded in the wondrous complexities of self-discovery and the power of friendship. Bonus: Francesca Baerald’s stellar illustrations.