TOP PICK! Review of THE DRAGON OF HIDDEN TREASURES by Juliann Troi 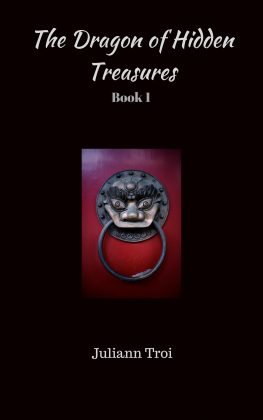 Kathryn Kidwell is an American living in turn of the twentieth century China because her father William’s business, Kidwell Industries is located there. Kathryn goes to college at Harvard in Boston, but returns to China and her family after graduating. When she gets off the boat in search of her father, she must avoid the advances of an overbearing man she met on the boat. In her efforts to get away from him, she collides with a Chinese peasant, Ty Wang. Though neither of them say anything, there is an instant attraction. Kathryn finds him handsome. Ty has seen her before and knows of her family through his past life, where he also went to America and learned to speak English, before he became destitute.

She forgets the interaction once she is united with her father, William, and heads home. He tells her of the recent unrest in their city of Canton. While the Kwangtung Province had been a center of foreign commerce, the Imperial system collapsed in 1911. Ever since it has seen political unrest and is governed by warlords who are constantly being overthrown.

She assumes she will help with the family business, since she just got her degree from Harvard. However, since she is female, that will not be possible and her father has made other plans. She is to marry his successor, Collin McNeal, someone she has never even met. If she wants to be a small part of the business, she will do so as Collin’s wife.

Kathryn is mortified. That night, she dreams of Ty Wang, but wakes and realizes she has no choice but to agree to her father’s plans. He gives her a sapphire and diamond engagement ring, that had been her mother’s, who is now deceased. She tries to hedge the wedding by saying she will need at least a year before marrying Collin in order to get to know him. Her father agrees and Collin is invited to dinner that evening so that the two can meet.

Lucy, a British friend of Kathryn’s, is to be married at Christmas. She comes to see Kathryn and persuades her to go into town to shop. Kathryn warns Lucy of the growing unrest and expresses concern that is may be unsafe for them to go there. Lucy says it is all nonsense and bullies Kathryn into going to town.

They shop in the market when they arrive and all seems well. Ty Wang has caught sight of Kathryn and spent the previous evening thinking about her as well.  He knows she is a Kidwell and that she is wealthy, but does not know her first name. He tries to catch her first name and follows Kathryn and Lucy at a distance.

The girls stop at an outdoor vendor in the market who is selling jewelry. Kathryn is instantly intrigued by a ring shaped like a dragon, with a pearl inside. The ring symbolizes The Dragon of Hidden Treasures and the protection and myth of the dragon. Kathryn longs to buy it but Lucy thinks it is just trash and scolds her to keep her from buying it.

The girls stroll further into the city to a fabric store full of wondrous cloth. But as the girls shop, the sound of gunfire can be heard outside. The shop owner closes down and pushes the girls out into the street. They are soon caught in the crossfire of war. Kathryn does her best to get them to safety by navigating through back alleys, but soon the girls are spotted by soldiers and accosted.

General Cheng Jiong meets with them and wants to know who they are. Ty Wang is now by the general’s side as a Chinese/English translator and is revealed to be a colonel in the armed forces. Kathryn tries to speak respectfully and maneuver her way out of trouble but Lucy becomes demanding and rude. Lucy is shot dead. The general puts a gun to Kathryn’s head and is planning on shooting her. Ty intervenes and suggests that they kidnap Kathryn instead and demand money from her father, since he is rich. The general agrees and places her in Ty’s custody, since it was his idea. If it works, fine. That will mean more money for the general’s army. If the plan fails, Ty will pay with his life.

Kathryn is devastated when the general wants Ty to take her to the general’s home in the north. If that happens, her father will not know where she is and will not be able to rescue her.

Those who read romantic stories full of adventure and intrigue will enjoy this story. The reader is immediately pulled in from the very first page. Excellent writing, with attention to details, that makes the characters and setting leap off the page. The characters are vivid and unique and the story feels original also. The story is also full of twists, turns and betrayals.

There were a few spots that could have used a few editing brush strokes to make the women more believable in their actions at the beginning. At times, Kathryn and her mother figure, or Amah, seemed a bit too accommodating, even for the times, and perhaps could have  protested the actions of the male figures more. But this did serve to show the reality of the times and location, where women had little say in anything, including their own lives. At other times, the pace was so fast, the main characters had to solve problem after problem.

Fans of fast-paced romantic suspense, adventure stories, war dramas and the works of Amy Tan will enjoy this novel. There are disturbing images as well as scenes of graphic violence. This is also book 1 in a series, so the ending is not resolved.

Smashwords : 4.99
Amazon e-book: $4.99
Find it on Goodreads
Like it on Facebook
More about The Dragon of Hidden Treasures on UBR


Read The Dragon of Hidden Treasures