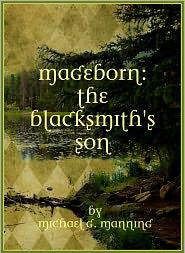 More about UBR Flashback – Review of MAGEBORN: THE BLACKSMITH’S SON by Michael Manning on UBR

Five years ago, Underground Book Reviews (UBR) opened for business as a little Weebly book review blog started by four aspiring authors looking platform to launch their writing careers. I was first up to write a review, so I picked a promising indie fantasy book by a guy named Michael G. Manning. I wanted to start UBR off with a positive review. With my wife’s help I explored Amazon's Kindle titles and came upon MAGEBORN: THE BLACKSMITH' SON. It already had about 20 reviews, mostly positive. I read the pitch, looked over the sample and then bought the book for only 99 cents.

My instincts were right. MAGEBORN turned out to be a pretty damn good book and a great way to kick off our website. Since then, MAGEBORN has gone on to meet amazing success, with over 800 reviews on Amazon as well as spawning an entire fantasy series. Michael G. Manning is perhaps one of the most successful indie fantasy authors on the market today. I had an opportunity to interview Michael after that review. He is a pleasant gentleman with a deep connection to his fan base. We at UBR are extremely pleased he followed us over to the new website, and we could be a small part of the MAGEBORN journey - and that’s really the most important point.

As we move forward to the next five years, Underground Book Reviews wants to be a small part of YOUR indie journey. If you're not already, we hope you'll become one of the 600+ indie authors who have joined our new network since January. In the past year we have undergone a radical transformation since our relaunch, and in the coming year we will unveil even more amazing new opportunities for quality indie authors to get noticed. Remember, you can’t get reviewed until you submit!

Without further delay, here is our review of MAGEBORN: THE BLACKSMITH’S SON as it appeared on 15 September 2011 on our old website, under my old byline of "Brian's 99 Cents."

Michael G. Manning’s debut novel, Mageborn: The Blacksmith’s Son, is the tale of Mordecai, the village blacksmith’s teenage son. It takes place over several days in the castle of Mordecai’s benefactor (and his best friend’s father) the Duke of Lancaster. Through many twists and turns Mordecai learns he is actually the son of a murdered duke, falls in love, makes a mortal enemy, and discovers he is a brilliant wizard.

Manning employs conventional fantasy themes, such as wizardry and medieval-style settings. He doesn’t break any new ground in Mageborn, but he doesn’t have to. It’s Manning’s solid presentation that makes this an entertaining read. He seems to understand what makes good fantasy - a delicate balance between world-building, complete with history and cultures, without losing sight of the characters that inhabit it. Manning sweeps the reader from one scene to the next with tight chapters, efficient descriptions, flowing action, and likable characters.

The hero, Mordecai, is a geek’s dream. He’s like a kid who’s really good in math and isn’t afraid to show just how smart he is, but somehow manages to come off as cool. However, Mageborn’s strongest characters are its women. Penny (Mordecai’s love interest), and Lady Rose (the beautiful noble with a heart of gold and a well-hidden dagger) leave the reader wanting more.

Readers will also appreciate how Manning handles the fantasy elements in Mageborn. In any given fantasy series, hardcore fans always pay close attention to the rules governing magic. Does the author make the unbelievable... well, believable? In this respect Mageborn doesn’t disappoint. Readers will enjoy Marcus the Heretic’s chapter introductions, where he scientifically details the nature of magic in the Kingdom of Lothion.

The book is not without its flaws. Lord Devon Tremont, the villain, comes across slightly two-dimensional. Sudden perspective shifts and abrupt narration-style changes can make this book a bit bumpy at times. While there is very little profanity, when it is used, it feels too modern and out of context for the setting and characters. When you encounter the profanity it’s like rolling over speed bump on a smooth asphalt road, you wish it wasn’t there. Overall, however, these flaws are minor, especially for a first novel.

In addition to the few snippets of strong language, this book contains some sexual content, including an attempted rape scene, and swords and sorcery violence. Overall, nothing is gratuitous and the book should be suitable for the older teenage reader and up.

Mageborn, The Blacksmith’s Son will put a smile on your face and make you glad you read it. I therefore bestow upon it a rating of 85 out of 99 cents. I’ll be on the lookout for the sequel, which according to Manning’s Facebook page, is nearing completion.

MAGEBORN on Amazon (after 5 years and its still only 99 cents!)