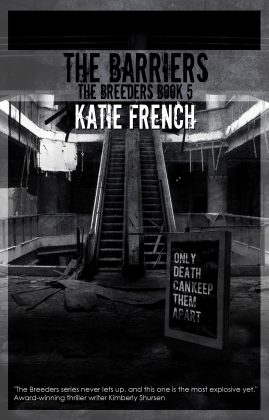 More about Underground Title Debut: THE BARRIERS by Katie French on UBR

A little about the book:

Riley hasn't seen her boyfriend Clay or her nine-year-old brother Ethan for two months. Between violent road gangs and ongoing clashes between the Breeders and the Free Colonies, are they even still alive? But Riley will never stop looking. Her search takes her to Kirtland Air Force Base, where she finds the remains of a battle and one glimmer of hope: rumors of the boys heading toward the Free Colonies and a man who can help her get there. The only catch? He nearly murders Riley the first time they meet.

Meanwhile, Clay, Ethan, and Betsy struggle to steer clear of bandits, thieves, and slavers. Their water is gone, along with Clay’s memory and Ethan's patience for Betsy, who only makes things worse by trying to convince Clay they're in love. With Clay's mind muddy, it’s up to Ethan to keep them alive long enough for Riley to find them.

The route back together is paved with trials—and how many more have to pay for their freedom with their lives?

Get the book on Amazon (Link goes here)

Haven't read the first books? They are on sale now!
The box set containing Books 1-3 and two bonus short stories, is on sale (only $2.99!) for a limited time. Save over 75% on buying individual books. The books have been downloaded over 50,000 times with hundreds of four and five star books. Book One was nominated as a semifinalist in the Kindle Review Book Awards.  Get the books on Amazon.