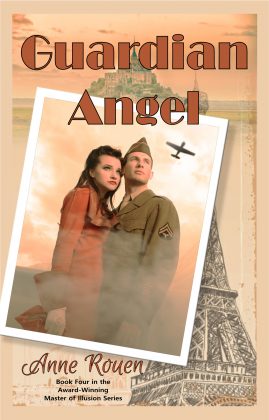 Armand DeLaine works for the marquis de Beaulieu as a tutor to his son, Nicolas. Nicolas and his mother, Angelique, are concert vocalists who tour Europe, so Armand accompanies them as they travel about touring. Armand’s father is a publisher, bent on publishing the memoir of the late Madame Dupont, Angelique’s godmother. He was sent to spy on them in order to see if the information written about them and their noble family is indeed true so
that the memoir can be published.

But Armand falls in love with the family and immediately regrets his betrayal. He is on a long boat cruise with the family and cannot get home to reach his father and beg him not to publish the book about them. As soon as the boat docks, Armand asks for time off to see his family. The marquis generously grants him leave. Armand tries to tell his father that Madame Dupont specifically stated in her will that the diary was to be kept private. Unfortunately, Armand arrives immediately after the book has been published. His father needed the money and also got approval to publish the story from another relative, Countess Kireyevsky, who only cares for money and cares not for the family or anyone else.

The marquis and his wife find out about Armand’s betrayal and Armand is let go from his position. But Nicolas, the boy he tutors, has grown close to Armand and so Armand is allowed to stay. Thus begins a close friendship between Nicolas and Armand.

Earlier, Nicolas had signed a contract to perform at the Opera Magique, owned and run by the cruel Countess Kireyevsky. In fine print it stated that Nicholas must perform there every week. So Nicolas has to move in order to perform there consistently. He and Armand befriend one of the dancers there named Lisette. Lisette helps them navigate the turbulent waters of dealing with the countess and finding another singer, Gerry, who can pretend to be Nicolas and fill in for him when he is unable to sing.

The plot takes another turn when Hitler comes to power and WWII breaks out. Then everyone must try and navigate the tension of averting the Nazis.

Those who like plot driven suspense novels that cover many years, include a number of characters in the plot, or readers of sweet historical romance, will enjoy this story. It is reminiscent of THE SOUND OF MUSIC in that it is a story of a musical family who must interrupt their lives in order to deal with the war and also contains a love story as a subplot.

This story is not for those who enjoy character driven novels, as one of the weaknesses was character development. The story was told from multiple points of view so it was difficult to know who to root for. There was also a bit of confusion in the first few chapters because the point of view changed so often. Once the novel was in full swing, a few chapters in, it was easy to see where the story was headed and the story line and characters were easier to keep track of.