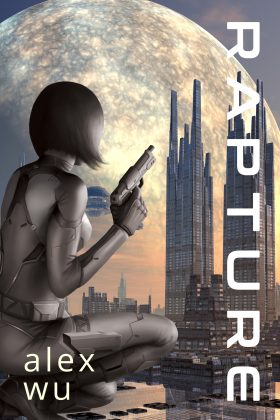 Whether you’re religious or scientific, you must have heard of at least one prediction on how the world will end. In the year 2067, the Purists believe that rapture will bring them to heaven where they will live for all eternity. But when believers of The Pure start to go missing, the government suspects foul play.

In the somewhat-distant future world of RAPTURE, Alex Wu imagines the Americas and Europe uniting into one supernation with Havana as its capital. La Republica, as it is called, is one of the three supernations of Earth, and all of them are in barely friendly terms with each other. The world, essentially, seems the same as it is now — war, politics, and global tensions still very much present.

At the dead-center of this story is Reiko Liebenstadt, a special agent in La Republica’s law enforcement agency, whose career has been tainted by an enormous mistake she made years before. Redeeming herself as a fully capable agent is Reiko’s top priority. So when the almost-unsolvable case of missing Purists getting “raptured” was given out, no one else but Reiko jumped at the opportunity. A well-developed character, Reiko is relatable in her thoughts and responses. All throughout the book, she acts on whichever choice benefited her more, but she also beats herself over her decisions – much like any other human being would. The supporting characters, on the other hand, vary from well-developed to tired stereotypes. The Luans, especially, felt both human-like but not at all. Nevertheless, the bonds and connections between characters are fleetingly there. They all have their own self-interest prioritized. And perhaps this too is a portrayal of the self-centered nature of humanity.

The pacing was erratic — sometimes, it’s too fast; other times, dragging. In the first half, particularly, it felt like it was taking its time to catapult the story. The plot felt simple at first, since the premise seemed like a typical mystery sci-fi. But the gem of this story lies with its themes and how the author incorporated them into the story. RAPTURE is not just about religion and politics at a macro-scale. It also looks deep inside us. It talks about the morality and conscience of the human heart. For those looking for a thought-provoking read jam-packed with action scenes set in a futuristic world, give this book a try.

This book is not just about religion and politics at a macro-scale. It also looks deep inside us. For those looking for a thought-provoking read jam-packed with action scenes set in a futuristic world, give this book a try.

Amazon e-book: $2.99
Visit the Official Website
Find it on Goodreads
More about Rapture on UBR