5 Stars! Review of THE FAIRYTALE CHICAGO OF FRANCESCA FINNEGAN by Steve Wiley 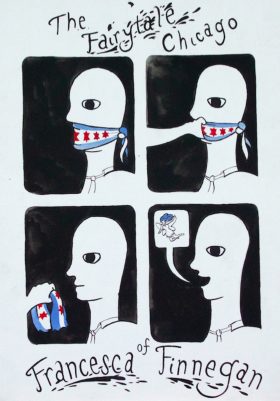 Richard K. Lyons is living the American Dream–he’s a successful businessman (the vice-president of something or other) with a lovely wife and son. The price he’s paid for that success? He gave up his childhood dreams and imagination and worked hard to do exactly what was expected. He went from being a boy, Rich, to being the man, Richard.

At the start of the story, Richard is exactly the antithesis of childhood dreams. When the reader is about to give up on him as a sad, unlikeable, and completely irredeemable ass, we get a glimmer of hope. A young street waif challenges him to perform a magic trick. Richard changes the sign she’s holding from “Caution: Falling Ice” to something witty and charming with one quick stroke of the pen. It’s this pen that triggers the real magic of the story.

The girl looks familiar to him, but Richard doesn’t know why. She tells him to throw his pen into the river and if he throws it far enough, she’ll tell him how he knows her. The 24-karat-gold fountain pen “had once been sacred to Richard,” signifying everything about his shallow life with all the trappings of success. In throwing it, he slips on the ice and hits his hear. Memories return of a long-ago adventure with a mysterious young girl, Francesca Finnegan, through a hidden East Side of Chicago on the el’s Lavender Line.

During his magical night, Rich learns the true source of the Great Chicago Fire and the significance of the city flag. He visits long-gone landmarks, like an amusement park (Riverview), the Dunning Insane Asylum, and the last Chicago farm, as well as existing places like The Green Mill and the Aragon. T

Anyone who is familiar with the real Chicago will be smitten with the alternative city only accessible via the Lavender Line or in the pages of The Fairytale Chicago of Francesca Finnegan. Because the stories are so completely intertwined with the history, lore, and culture of Chicago, some of the enchantment of Rich and Francesca’s adventures will probably be lost on those who have never been to the city. For anyone who has fallen under its spell, this is a fun and fast-paced tale of adventure and redemption.

The Fairytale Chicago of Francesca Finnegan is a whimsical frolic through an alternate Chicago–past and present–complete with the “real” stories behind many famous Chicago sites, events, and characters. Readers unfamiliar with Chicago landmarks, history, and culture may not find the stories as entertaining as those who have fallen under the Windy City’s charms, but anyone who has will be captivated.

Amazon e-book: $4.99
Amazon hard copy: $9.99
Find it on Goodreads
Like it on Facebook
More about The Fairytale Chicago of Francesca Finnegan on UBR