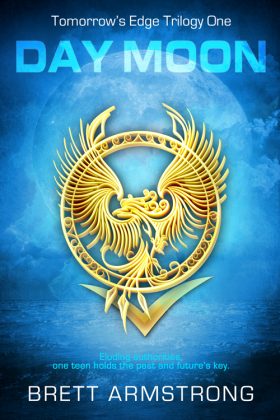 Set in 2039 A.D., in a not-so-distant world of self-driving cars and artificially intelligent storekeepers, seventeen-year-old Elliot could have been just an ordinary university student sketching illustrations to his heart’s content and eating lunch with the girl he adores. Except he’s not just any ordinary teenager.

Taking a degree program in the computer science, he works on Project Alexandria, a global initiative his deceased grandfather helped build that aims to provide the entire world secure and equal access to the vast knowledge mankind has accumulated throughout its existence. Thus, all forms of print are destroyed. And the not-so-ordinary Elliot owns a book—a very special book gifted to him by his grandfather. The book is a collection of Shakespeare’s complete works and in between its pages, there lies something peculiar. One sonnet in the book, “Day Moon,” does not match the one in Project Alexandria.

There is much to enjoy in DAY MOON. The premise itself will hook you and pique your interest. This may be a futuristic sci-fi novel but the world in which the protagonist Elliot walks on is quite close to the present one. It is a chillingly plausible near-future which makes it so believable. And referring to current trends in technology and pop culture as “old school” or “classic” by that time will definitely bring a smile to your face.

However, for an action-adventure novel, it is lacking. The plot is dragging for most parts and there is no sense of urgency that can propel the reader to know more of what is going on. It is this page-turner feat that helps action and adventure stories like this one feel more immersive to the reader and DAY MOON is running short. The characters were okay but there is little emotional connection to create with the reader. One will not feel attached to any of the characters after reading. And the fact that most of the first half of the novel was spent inside Elliot’s head, ruminating on his life and the world around him in wordy paragraphs, certainly didn’t help.

Despite all this, Armstrong must still be credited for an intricately crafted novel and his palpable knowledge on both technology and literature—something that he has admirably integrated into and made significant in the novel. There is no doubt that DAY MOON is an interesting book and a good introduction to a world worth delving into.

Despite its slow pace and a cast of characters you might not feel emotionally connected to, this is a novel worth checking out for its amazing world-building and its exploration on what makes up truth in the digital age—unsettlingly, something the world is experiencing right this moment.

3 Stars (out of 5): Pretty good. Sure, there were some issues, but it was still worth the read.

If you had a writing motto what would it be?
If fiction and fantasy books are escapism, then let an author write them so as to better equip the reader to face reality by the end.

Where do you draw your inspiration?
Ultimately, as a Christian writer I believe God is the source of all my inspiration. The individual circumstances of inspiration vary but are very image driven. My most recent novel, Day Moon, came together from a number of events around the time I finished my undergraduate degrees. At the time I was graduating from WVU, there were a few controversies in the sports world where people’s achievements were being overturned because of things they had done more recently and it seemed as though history was being erased to an extent. I didn’t think the wrongs committed should be ignored, but it struck me as very wrong to try to "re-write" history. Around that time I also had an assignment in my capstone writing class: a writing “scavenger hunt”. I had to observe certain things and write little story notes based on them. It was raining that day, so I ended up on the portico of the English hall looking out on the campus at the library and I just began writing about a student doing the same thing. The question of why the library was significant came to mind and that’s when Day Moon started coalescing into its basic outline. I had the basic premise in place within a couple days. Most of my stories begin in a similar way, in the sense that I have a single very strong image that I've seen or imagined and it resonates with me so deeply that I start to ask questions and try to figure out what I "see". If those answers are intriguing enough, they bring on further questions until a story has developed and I'm hooked. That first scene often acts as an anchor for me later on, to keep pulling me back to the story even when a difficult scene or life interdicts and I have to leave the manuscript for a while.

What is one interesting fact about you?
If this qualifies as interesting, I'm probably the only person in the world who played the video game Indiana Jones and Infernal Machine enough times to accidentally turn Indiana Jones into Han Solo on the game. To explain, the game was from back in 1999 and included a code that would turn Indiana Jones into a pirate from the Monkey Island game series. The computer version of Infernal Machine was prone to glitches, but glitches in the best possible sense. On a number of occasions, I used the pirate code on Indy and he only half completed the transformation. The result was Indiana Jones's body, but with a mix of the pirate's clothing and Indy's, which included a black vest and white shirt, effectively making Indy look like Han Solo. On other occasions I accidentally turned Indy into a Douglas fir tree, a hula-hoop, and a skeleton holding a machete. Immense replay value.

Have you learned anything from the self publishing process and would you do anything differently next time?
I've learned that you really have to hit the ground running the moment you sign a book contract. There is more to be done than can be done between that point and release day. Contacting bloggers for reviews/interviews/spotlights, making a book trailer, preparing guest blog posts, promotional images, etc. If I could go back, I would've done much more of that before release than after for my most recent book. Planning things out and keeping a calendar of reminders on your phone helps meet deadlines (both self-imposed and from others). Getting requests in early with blogs and tour services will ensure everything lines up as it needs to in order to get the biggest release possible for the book. I've found that doing things staggered over time doesn't produce the same effect as one big push.

What has been your most successful marketing strategy?
In terms of marketing, I wonder if I have a strategy. But reaching out to bloggers and using a blog tour service have been highly effective. Bloggers can get the word out without being invasive and with a seemingly more genuine enthusiasm than I ever could. Not to mention, once a blogger has backed your work, someone else seeing it might then offer an additional opportunity. Having a chance to get the book out there that can then create future opportunities is an incredible asset and I don't think simple promotional materials and ads can do it quite as organically as working with bloggers.

What is the best kept secret you have found in regard to indie publishing?
I feel like being considered an indie author carries a certain stigma and I seriously doubt I'm alone in that. An interesting thing I've found is most readers, whether out in the greater world or review bloggers, really don't treat you differently based on whether you are an indie author or not. Which is great. Some trade organizations and obviously traditional publishing houses might take note of it and have some exclusivity clauses that kind of disparage indie authors, but for the most part, no one treats it negatively. In fact, there are a lot of outlets that enthusiastically support indie authors, present company included. I consider this a secret, because, the average person really doesn't recognize how diverse the publishing world has become and within the publishing world there are such stark lines drawn between how your book came to be in someone's hands. Which is so odd, because I think if readers were to do a blind "taste test" of an indie novel and "traditional" novel and pick the best of the two, the outcome would be pretty even. So it isn't a quality of writing thing or even a marketability thing (because a lot of indie titles seem to outdo less pushed traditional ones). I suppose the secret I've uncovered is it's ok as an indie author to approach bookstores, bloggers, etc. and not feel like there's a sign hanging from your neck that tells them your book is less important, valuable, etc. than one from Harper Collins. One of my favorite sayings is to just let the writing speak for itself.