Legends of the Winged Scarab - Book 3

While all of my locations are real, many of my ideas come from true events; with the lot of them being pure figments of my imagination – although one can only hope their probabilities (and hence threat to our world) are non-existent to minuscule.
Once I had locked onto a real ghost ship, the former Russian M/S Lyubov Orlova, it was easy to continue my protagonists’ journey – after the unfortunate eruption of the Yellowstone Supervolcano (a real scientific prediction).
During the process of writing, the bad guys evolved as being more interesting than my good ones –it was fun to flesh them out and, once again, toss them about a bit on the high seas (serves them right).

At least two Beta-readers with English degrees check not only for grammar and sentence structure, but also for continuity of the story. And even though they like me personally, they are not shy to hit me over the head when something strikes them as not being right (while leaving my ego to live another day).
Actually, for any of my books, my editing process is never finished...I reread them periodically, even long after publication, just to see if there is another of those pesky little nits that slipped through the cracks the previous times (bless Amazon's re-upload feature). I have also changed covers and blurbs when better ones came to mind (often in the middle of the night).

After the Cataclysm, Book 3 of the Author's "Legends of the Winged Scarab" series is a dystopian thriller. It combines modern action & adventure with the mysteries of Ancient Egypt as told in Khamsin, The Devil Wind of The Nile, Book 1. Sirocco, Storm over Land and Sea, Book 2, and The Crystal Curse, Book 4, are also modern-day thrillers with tie-ins to the other novels.
However, each volume can stand alone. 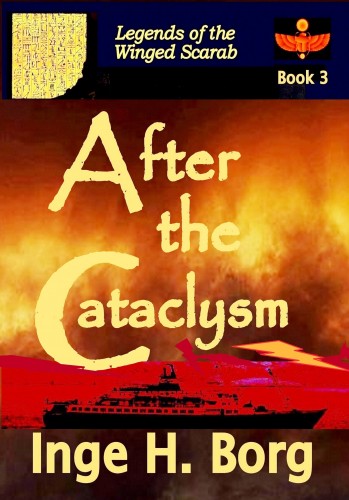 Yellowstone Supervolcano explodes, turning North America into a desperate post-apocalyptic world in which a ghost ship becomes the floating battleground for the protagonists from Book 2.

Egyptologist Naunet Wilkins and her scientist husband Jonathan must flee the lawless United States. They accept an uneasy offer from Egyptian archaeologist Jabari El-Masri, a fugitive from his own country, who is given refuge on Venezuela’s Isla Margarita, owned by fanatic art collector Lorenzo Dominguez.

Did El-Masri barter the fifty Egyptian Golden Tablets and the expertise of his American friends in exchange for his own exile? Once again, Naunet is torn between translating the ancient curses for the ruthless South American billionaire and protecting future generations from the dire prophecies. As another ill-wind blows, she tries to find the answer.

Yellowstone Supervolcano explodes; it’s flee the US or die.