Legends of the Winged Scarab - Book 4

Choosing the Indie route is obvious; over are the "pink slips" from agents and publishers. At last, writers have complete control over their work (alas, one can only hope it is worth reading...)
The Crystal Curse, as the previous three books of the series, was first published with Amazon-KDP, as well as on Smashwords (slightly different formatting required). I also designed and published this on CreateSpace as a print book.
A couple of weeks ago, I unpublished with Smashwords and placed the entire series into KDP SELECT. Now, rhe books can be "borrowed" under the KindleUnlimited program.

I use a couple of Beta readers who have a degree in English; several reviewers will also send me a private note when they find "echos," or typos which are then immediately remedied.
As with all my books, I never finish writing, publish and forget them. My own reading (mostly of the paperbacks) is ongoing just to make sure nothing is amiss. Besides, after several years, it is fun to wonder, "I wrote that? How did I know about this?" and "What a great sentence." Of course, horror strikes when a typo is detected...

The fourth book in a series does present a challenge; how much background does one insert and still keep the story fresh? Or should one simply expect the reader to be acquainted with the preceding volumes?
As much as I could, I tried to make each volume a stand-alone novel. Of course, a lot of innuendo and insight would be missed by only reading one of the books. That said, The Crystal Curse can still stand alone. 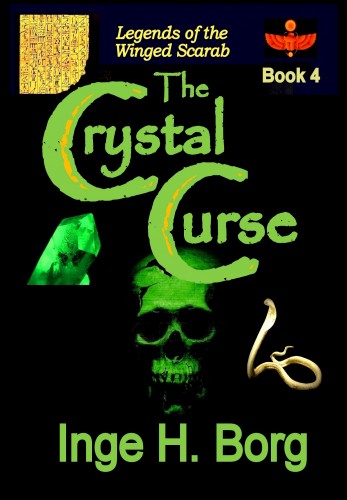 Pitch Perfect Finalist
Scheduled for review – the information below will be filled out slowly. It will not be visible to the public until it is published on our magazine.
Tentative review date:
Reviewer: user last188
The Rating: 

Civilized life in the United States has collapsed following the Yellowstone Supervolcano eruption. A handful of unscrupulous foreign profiteers conspire to implement a New World Order. To achieve their idea of Earth’s sustainability, millions are to be ‘neutralized.’

Pitted against them are Egyptologist Naunet Wilkins, her scientist husband Jonathan, and their friends from Borg’s preceding volumes of the Legends of the Winged Scarab. They are kidnapped by the piratical owner of a converted ghost ship carrying a ton of ancient golden tablets bartered away by the former Cairo Museum director Jabari El-Masri. He and Naunet are forced to recreate their supposedly lost previous translations of the First Dynasty slates.

At a conference on Malta, the eight super-rich power mongers hammer out their diabolical agenda. When El-Masri tries to save his family first by lying about wondrous crystals to be found in the Ideon Cave on Crete, and then by admitting they only grow deep within the Lost Labyrinth of Egypt, the avaricious eight set their sights on mining them.

But El-Hanash, the Crystal Snake, coils for those who dare defy the Crystal Curse. Who will live? And who will die?

Naunet and Jonathan Wilkins are again kidnapped by the piratical owner of a ghost ship carrying a ton of ancient golden tablets. Former Cairo Museum director Jabari El-Masri lures them into the Lost Labyrinth of Egypt where El-Hanash, the Crystal Snake, coils for those who dare defy the Crystal Curse.