This is Book 5 of Inge H. Borg's historical fiction series about the mystery of Ancient Egypt, the "Legends of the Winged Scarab."

Book 1 is Khamsin, The Devil Wind of The Nile (3080 BC). Book 2, Sirocco, Storm over Land and Sea, a modern-day action & adventure thriller. After the Cataclysm is Book 3. The Crystal Curse is Book 4.
All books can be enjoyed as stand-alone novels.

Originally submitted for review to Brian Braden since he read and reviewed Book 2 of this Series.
On January 21, I received this reply from Underground:

"The reviewer you selected declined your review request. As a premium subscriber, you can submit your book to a different reviewer by going to The Nile Conspiracy and clicking on “Edit Info for Reviewers” in the notification box at the top of the page..."

I would therefore respectfully request for you, Chantelle, to review this novel - preferably after having reviewed The Crystal Curse (Book 3). The Nile Conspiracy is based on the construction of a real hotly disputed monster-dam in Ethiopia (the Grand Ethiopian Renaissance Dam) which threatens to choke off the Blue Nile.
(Of course, should you wish to start with the previous books, I'd be only to happy to supply them in mobi-format). 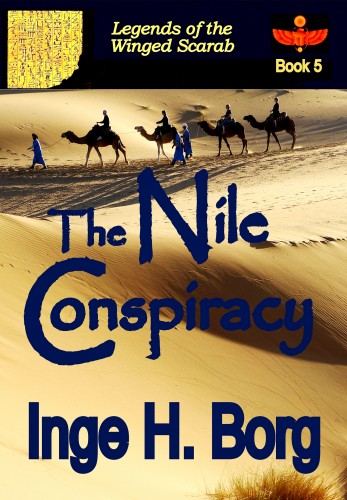 Workshopped with Jim Bennett, KBR Reviewer
Edited by Jo Cryder
Cover design by Self – from an authorized Photograph of Jim Bennett
Formatted by Self (After painful study of the Smashwords guide, I know how to do this)
Published Through Amazon Createspace – KDP
Distributed by Amazon

Riveting adventure and international intrigue find Naunet and Jonathan Wilkins back in Egypt where the construction of The Grand Ethiopian Renaissance Dam portends a catastrophe of biblical proportions. Imagine the mighty Nile running dry due to human interference. The novel is based on the construction of a huge Ethiopian dam on the Blue Nile, Egypt’s lifeblood.

Amidst their struggle to save an ancient site, the archaeologists are caught up in a dangerous conspiracy. The site of their explorations becomes a death trap when desperate politicians decide to turn an ancient underground labyrinth into an emergency reservoir.

Will the combined recklessness of two governments explode into the annihilation of the inhabitants living along the Nile?

In The Nile Conspiracy, several characters, good and evil, from the series’ preceding volumes are once again pitted against each other, the elements, and time. Borg captures the struggles of an economically depressed Egypt by skillfully combining the challenges of her post-apocalyptic world with the legends of an ancient culture.

This is Book 5 of Inge H. Borg’s historical fiction series about the mystery of Ancient Egypt, the “Legends of the Winged Scarab.”

Riveting adventure and international intrigue find Naunet and Jonathan Wilkins back in Egypt where the construction of an Ethiopian dam on the Blue Nile portends a catastrophe. The archaeologists are caught in a dangerous conspiracy as Egypt decides to act and turns a secret maze into a reservoir.

If the Nile runs dry, Egypt will die.