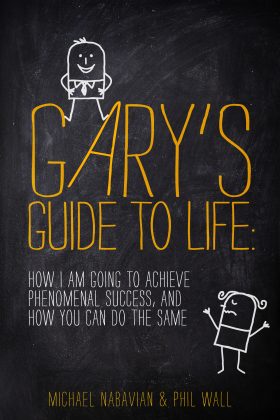 Gary Speedwell is nothing if not a man of action. He has a plan to become wealthy and successful–modeled after his hero, the self-help guru Marshall Brewster: he’s writing a book “unveiling the strategies that are going to lift him out of ordinariness and set him – and you – on course for phenomenal success.” Although that sounds utterly ridiculous, in this day and age of nobodies being famous for being famous, why not? Forget the conventional wisdom that one should be successful in order to write a book about becoming successful, just put that cart before the horse.

And Gary does–with gusto. The reader will cringe as Gary, with complete naiveté and total belief in himself, pursues his dream. At the start, Gary tells his readers that, “If you pay close attention to what I’m going to teach you, and put into practice what you’ve learned, then, before you know it, success will be within your grasp–every bit as much as it is within mine.” It doesn’t take long for the reader to realize that’s not a promise so much as a warning. With an ex-wife seeking for “closure,” a soon-to-be-ex-girlfriend (and mother of his son, Jack) seeking to give him a wake-up call, and a landlord seeking the rent, all in hot pursuit, Gary forges ahead, writing with soul-baring candor and cringe-inducing honesty about his plan and the obstacles he has to continuously overcome.

Perhaps the greatest appeal in Gary’s determined and wholehearted belief his dream is within his grasp (despite all evidence to the contrary) is how close his wisdom-turned-upside-down comes to what goes on in the real world. We all know a Gary. Many of us have been a Gary, although few with such aplomb. Whether he’s pursuing the right woman (a successful man needs a successful, powerful woman, of course, and so Gary is determined to hook up with his boss, Louise, and spends many working hours attempting to woo her, rather than, you know, actually work), or attempting to manipulate his landlord into forgetting about that pesky rent that’s past-due, Gary is always 100% convinced that he has succeeded. Until his failure turns around and slaps him upside the head. Even then, we can’t help but hope Gary finds his way back to what his anecdotes and tangents make perfectly clear to everyone (except Gary and his mother) is the path to success for him.

Hilarious in its complete embrace of faith-over-substance approach to success and wealth, Gary’s Guide to Life will have readers cringing and laughing at this witty sendup of the Self-Help aisle. If you’re a fan of Dr. Phil types and take your self-help gurus seriously, you might not appreciate this rollicking satire. For everyone else, you’ll want to step in and give Gary a good shake for being so very blind to what’s blatantly obvious to the reader, but you’ll also root for him to succeed at being successful because he is so endearingly naive.