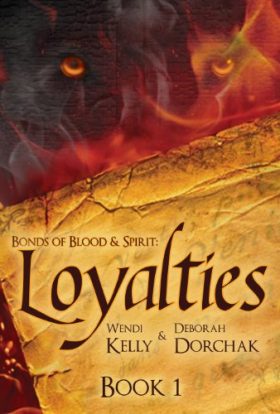 More about Interview with Deb Dorchak and Wendi Kelly on UBR

Bonds of Blood and Spirit is an exciting series authored by Deb Dorchak and Wendi Kelly. Loyalties is book one in this series, and in this interview, Deb explains how the story came about and what it's like writing books with another author!

1) I understand that Bonds of Blood and Spirit: Loyalties has been authored by two people. Could you tell us a bit about yourselves and how you came to work together on this project?

Wendi and I first met when she hired me to design her website. After having worked together on this project, we stayed in touch. At the time I was running a creative writing board and Wendi wanted to get into writing again. She joined and that’s how we started writing together. We found that our styles (and characters) meshed well. After I left my previous partnership, Wendi and I went into business together. Though most of our focus was on starting up Blue Sun Studio, a coaching and design company, we missed writing. Our characters wouldn’t stay quiet.

We decided to take our characters and give them the story they deserved. Part of it was for the sheer joy of writing, the other was to see if we could do this whole self-publishing thing. In 2010, the indie movement was new. Together, Wendi and I had (and still have) an amazing skill set. We’re both artists and we’ve both had experience in publishing and the corporate world. Our books went beyond entertainment, they served as portfolio pieces for our clients. Not only did we write the books, we designed them inside and out, did the developmental editing, and promotion.

The most amazing part is all of this was done from 2,000 miles apart. Wendi is in Chicago and I’m in Las Vegas. Seven years later, we have a successful business and six chunky novels under our belt.

2)Where did the idea for this series come from? Did you always know it would be a series, or did it start with the idea for one book and just kept on growing?

The idea came from the characters themselves. We already had histories with them. Some I had been writing for years on other creative writing boards. Wendi’s characters were newer, but no less rich in backstory.

Right from the start we always knew the story was too big to fit in one book, it had to be a series and we planned for that. We believe that when an author plans for a series, the story as a whole becomes more cohesive. So many times writers try to stretch a story that should have stayed put at one book. This one though, is epic and as we get into the second series Tau’s Pride we’re already looking at several generations having their story told.

3) How does the co-authoring work? How do you divide the workload?

Ahhh...here’s the part that fascinates other collaborators and solo authors alike. Our style of collaboration began with a play-by-post method. One writer has a character, they post a bit of story and leaves it open ended. The next writer adds their character in the scene with their response, and back and forth it goes, on and on.

After some trial and error, we discovered that Google Documents allowed us to be in the same document simultaneously. We could see each other writing in real time. At first it was choppy. Gaming was a good start, but it also developed a lot of bad writing habits. Once we got those out of our heads, we fell into a rhythm, not just alternating paragraphs, but sometimes right down to the sentence or word. We have some characters that we each write primarily, but for the most part, many of them are written by the both of us. It all depends on what the scene requires.

All that dialogue you read in the books is a real improvised conversation. We have a specific direction the story goes, but we have no idea what’s going to come out of our characters’ mouths until the conversation begins.

The main thing about writing together is leaving the egos at the door. Neither of us takes offense if the other changes a word or how a sentence is written. When we put on our editing hats, we’re ruthless. At the bottom of it all, if it doesn’t serve the story it goes or gets changed, and always after intense discussion and mutual agreement.

4) What are the best bits and what are the hardest bits about working with another author in this way?

The best bits are you always have someone to brainstorm with. In some ways, it’s like a marriage. There’s a lot of trust involved and you always have your partner’s best interests in mind. It’s not for everyone. Knowing how to work as a team, how to compromise is key.

5) Which are your favorite characters in the book and why?

That’s like asking a parent who their favorite child is. If we’re talking just the first book, I’d have to say it’s a toss up between Cole and Diego. Cole is so much fun to write because he’s the part of me who has the sharp wit and does whatever he wants to without caring what the rest of the world thinks. It’s never malicious though. He has good intentions even when it seems like he’s being a complete ass. Diego’s the strong, steady leader, steeped in traditional ways and trying to hold his world together. He’s tough on the outside and a mush on the inside when it comes to those he cares deeply about.

6) What writing advice would you give to others? What have been your highs and lows so far?

Tell your story. Even though there’s nothing new under the sun, that story hasn’t been told in your words and it’s up to you to put your own unique spin on it. Read. Learn your craft. While ultimately there are no rules in fiction, there are rules to writing, and you need to know what those rules are before you start breaking them.

The highs are reading good reviews from total strangers, or getting your book on bookshelves in stores like Barnes & Noble for the first time. It’s being told you have a professional product that stands up with everything else on a commercial level.

The lows? The days when the story grinds to a halt and you have to back up, untangle it and figure out why it’s not working. Constant marketing and promotion can also be a drag, those days when you wonder if anyone is paying attention.

But the lows don’t last for long. If you keep moving forward through the muck, something wonderful eventually pops up and you’re jazzed again, ready to take on the world.

7) Can you describe your writing process? What comes first, the characters of the plot? How much time do you dedicate to writing each day or week?

Our inspiration comes from everywhere. We already basically have the “uber plot”, we know where it’s all going to end. The plots in each book stem from that. In the case of Loyalties it began with a combination of character and plot. We had Regina, Cole and Harry’s backstory and we built around that framework.

8) What are you working on right now? (Individually and together)

Right now we’re working on book two/six (book two of the new series, which is also our sixth book) Tau’s Pride: Sacrifice. Personally, I don’t enjoy writing solo, it’s lonely work. Writing with Wendi is what makes it fun for me.

9) How would you describe your style and genre?

Wendi and I joke that our genre is the “Murphy’s Law” genre. You know, the kind of story where you’re asking yourself, “How much worse can this possibly get?” While we’re primarily paranormal, we do have elements of romance, fantasy, action and adventure, some horror and some history. You could take the paranormal element out of the story and it would still hold up. For us, it’s not about the super abilities, it’s about the characters and relationships, it’s about the drama. At the very core of it all, our characters are real people with real problems, ones we all can relate to, in an unreal world.

10) What are your hopes and plans for the future? (with this series and with other works)

It’s our hope that devoted readers will keep spreading the word about Loyalties. The overarching theme of unity is what our world needs now and much of what we write is a message of hope in the midst of chaos.