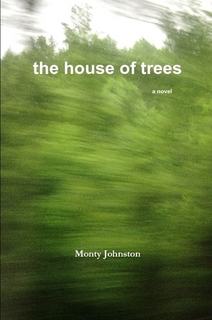 Lulu : 13.79
Find it on Goodreads
More about The House of Trees on UBR

In the world of writing, we spend a lot of time talking about the mapping of plot, our audience, and the marketability of topics and themes. But what about the simple art of writing? The passion that makes us put words on paper. I took an afternoon to talk to Monty Johnston about his writing philosophy, which seems to be a rare beast in our reader-centric literary world.

We met in the back room of a coffee shop to discuss Monty’s writing, where students were preparing for final exams. Monty is a product of the 60’s, and began writing in high school, when an English teacher liked a silly poem he wrote about suspenders. His writing continued in the form of journaling and letter-writing, but it wasn’t until he reached middle age and was in recovery from alcoholism that he started writing novels.

“I didn’t do fiction until I was probably 50,” he says. “And something seemed to be working.”

Monty’s newest book, The House of Trees, has a decidedly philosophical bent to it, though Monty wouldn’t classify it as philosophy by any means. “It’s really an experiential thing that goes along with the story-telling – people doing things, living.” It begins with seven strangers sitting around a fireplace, and follows them as their lives and relationships intertwine. Monty’s writing is unfettered by the checklists that are thrown about by agents and editors today. There is no preconception about genre or audience, and the plot in The House of Trees doesn’t start until midway through.

“The way I write is I don’t start with a plot,” he tells me. The House of Trees “started with the idea of several people in their 20s sitting around a campfire in the woods.” He had no idea what was going to happen after that, but he did know he had seven characters who needed to be written.

The House of Trees is set in 1999, coming up on Y2K, and the characters are taking a hard look at the system, at themselves, and at the fabric of their own society. “The characters happen to be in their 20s, but my experience is that people are interested in this all through their lives. When I was an undergraduate we started at 18, that kind of bullshit session. People who were alcoholics very often don’t get into it until they are in their middle forties. I was forty-four. It’s this perennial thing, where people are saying, How can I wring the most out of this – I got this one incarnation and I never took myself into the shop, and I dropped my transmission! You know?”

Monty’s sense of humor is dry and charming, and this also comes through in his writing. And of course, a plot does solidify once the characters take shape. But, like most of us, what makes Monty’s stories worth telling is the life he has lived, and the colorful characters he has met along the way.

“I worked psych emergency, on a psych ward at Harvard in Cambridge, we were on call to the emergency room. And learning all the language, I remember doing write-ups of people during an interview.” At the time, he thought to himself, “Ah, this is portraiture. You’re using psych language, but you’re trying to capture someone.” And Monty has carried this kind of portraiture into his writing.

This is Monty’s most recent self-published book, but he has written others. Many years back, I read one of his earlier novels, a small book with simple black typeset on a white cover, entitled A Thousand Years of Days. Once again, Monty refused to conform to an editor’s box. Instead of becoming mired in a single plot, he followed a family in short vignettes for a hundred generations. About halfway through the book I realized how much time had passed, how the writing style had slowly morphed into modern time, and I was suddenly struck with a sense of the passage of time. It is this sort of play on the usual format of novels that makes Monty’s writing utterly intriguing yet frustratingly difficult to market.

“Right now the fact that I’m having trouble promoting this is leaving me in a strange limbo, because I like this thing,” he says of The House of Trees. “I’m revising another book, and have a possible novel that I have begun, so I have a bunch of stuff that I can do, but this is the first time that I haven’t had one project that I was just going on. So when I was going on this, by mid-morning I would be going on it, you know, for several hours. And that’s how it has been for the last 20 years.”

Also for the last 20 years, Monty has been self-publishing through Lulu, where he gets 50% of paperback sales. Sure, he would love to see his books take off, but he’s not sure a traditional publisher is what he needs. After all, he wouldn’t get the same percentage, and wouldn’t have the same control over his book. “But that’s all pie in the sky, anyway,” he tells me. In this way, Monty writes for the art itself. As he would put it, “It's not that I write for myself, or that I write for the writing. It's not even that the story writes itself or that I would say I put myself in the service of the story. But who it's for - whether it's for me or others or both - or what the process of being written will turn it into - these are things I can't let get between me and the actual doing of it.”

Monty is a rare breed in this age of social media and self-marketing. He may not write only for himself, but, as he would put it, “The book writes for itself. I’d like others to read it, but as to where the story goes as it’s being written, that’s up to the story more than me.” In short, he writes because “something happens and you say, I gotta write that down!” And because of this, his novels have an originality to them that can’t be found elsewhere. Perhaps some of us fellow writers should put down our agent-centric formulas and take notes, for once, from a guy who loves his craft.

If you are curious about Monty’s novels, you can find them here.