TOP PICK! Review of A Necessary Act by Tony Wirt 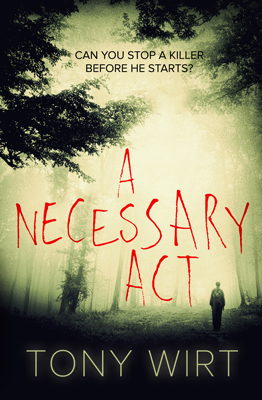 The concept of this novel is an interesting one. If you truly believed someone was destined to become a killer, would you do something about it? Would you stop them, before they started? Part One is set in 1996, where teenagers David and Matt keep a watchful eye on the school bully Scott Alston. Having known Scott since they were small, David has more reason than most to fear what Scott is truly capable of. David thinks Scott is on course to become a serial killer. All the signs are there. Bed wetting into his teens, abusive home life, domineering parents, and the torture and killing of animals. David wants to do something to stop Scott, and the final straw comes when the two boys witness Scott in the middle of what could turn out to be his first kill. With this tragedy prevented, David is even more determined to stop Scott Alston. Feeling abandoned by Matt, David goes it alone and the decision he makes one night lead to drastic and unforeseen consequences. Lives are changed forever and nothing will ever be the same. Fast forward to 2015, and Matt is returning to his home town to take up a job on the local paper. He bumps into his old friend David, who is haunted by the decision he made as a teen. Matt does not expect much excitement from his small town post, until a girls body is found burned in a field close to her home. Another girl a week later and it looks like the small town of Lake Mills has a serial killer in the midst. David, anguished by the mistakes of the past, is determined to stop Scott once and for all, and with Matt now convinced and on side, the novel crashes on a breath taking pace towards the climactic and unexpected ending. I literally could not put this book down. As far as thrillers and crime novels go, it ticked every box for me, whilst also managing to be unique in its concept and style. Great characters, genuine belly aching tension, and an ending that both surprises and satisfies…and yet is left, wide, wide open…I truly hope there is more to come.

A page turning psychological thriller that had me on the edge of my seat. An interesting and debatable subject matter; would you kill a killer before they killed? Something similar to the moral question about whether or not you would go back in time and kill Hitler as a baby. Also a brilliant and convincing portrayal of small town life.